Carbon emissions ‘could be 20% lower’ if no fossil fuel subsidies 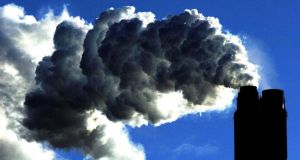 Carbon emissions could be at least 20 per cent lower by 2030 if the Government withdrew a range of fossil fuel subsidies, including those in the transport and peat production sectors, research from the Economic and Social Research Institute (ESRI) has found.

In its research, the think tank found that the removal of eight fossil fuel subsidies could have a “sizeable impact” on reducing emissions in the Irish economy while also having a modest adverse effect on growth and household income.

The impact of other environmental policies such as increasing the share of renewables in power generation and increasing energy efficiency in home retrofitting would come in addition to this.

The ESRI said that eight fossil fuel subsidies accounted for €2.44 billion in lost Government revenue in 2014. Those fell into three categories: transportation, electricity and peat production; excise tax rates on diesel fuel and kerosene; and means-test fuel allowances for households.

Some of those include subsidies on marked diesel used in agriculture, subsidies for electricity generation from peat, the exemption of certain jet fuel from excise duty for commercial aviation purposes and the diesel rebate scheme used by hauliers.

If all of those subsidies were to be removed next year with the exception of fuel allowances, CO2 emissions would fall 20 per cent by 2030 while gross domestic product (GDP) would decline by 1.24 per cent.

If Government removed the subsidies and increased carbon tax by €6 annually from next year, real GDP would be 1.8 per cent lower in 2030 while CO2 emissions would decline by 31 per cent compared to a scenario in which nothing changes.

What does the ESRI say?

“Lowering the cost of fossil fuels via subsidies encourages excess consumption of these commodities and accelerates climate change,” said Dr Aykut Mert Yakut, one of the report’s authors.

“Removal of fossil fuel subsidies would directly improve our emissions performance plus provide substantial fiscal head space for the government to use for other climate and social policies,” added Dr Yakut.

The ESRI is clear that if subsidies are removed, economic output in the subsidised sectors, particularly air transportation and peat, would be reduced.

On the whole, however, with the exception of energy allowances for households, the removal of subsidies would have a “negligible” impact on the real disposable income of households.

“Increasing the carbon tax, in addition to the removal of subsidies, would lead to more substantial reductions in emissions with relatively minor decline in household incomes,” said Dr Yakut.

1 Who are Ireland’s 17 billionaires?
2 My father in a nursing home wants to gift me his house
3 Are there annual limits on inheritances or gifts to a child?
4 Irish whiskey sales slow in US but distillery visitors top 1m locally
5 Dublin office vacancy rate hits lowest level in 20 years
6 Northern Ireland drops campaign for lower corporation tax rate
7 Shell counting the cost as sale of Corrib gas field completed
8 Pretax profits decline sharply at Tuam-based car tech firm
9 The economy and the election: Why everyone isn’t feeling the recovery
10 Help, I’ve no PRSI stamps – can I still get a pension?
Real news has value SUBSCRIBE