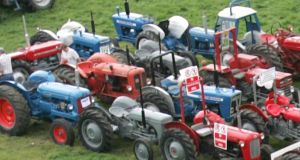 State-owned Bord na Móna is pursuing an auctioneering business poised to go into liquidation for an estimated €500,000.

Moybrone Holdings, which owns Paul Cooke Auctions in Naas, Co Kildare, has called a creditors meeting for January 11th in Dublin to appoint a liquidator.

It is understood that Bord na Móna is one of its biggest creditors. The State company confirmed it had begun legal proceedings in an effort to recover the debt and would not comment on the issue on Thursday.

“As this issue is now sub judice, Bord na Móna will not be making any further comment until this process is resolved,” a statement said.

Bord na Móna regularly uses Paul Cooke Auctions to sell on tractors and machinery it is replacing with new equipment. The Kildare company successfully auctioned significant lots of such equipment in October.

However, Bord na Móna never received any payment for this and subsequently began legal proceedings.

A formal notice from Moybrone Holdings published on Thursday states that it intends to hold a creditors meeting on January 11th under sections 587 and 588 of the Companies Act, 2014. Those provisions cover the appointment of a liquidator to wind up a company. The business does not have to be insolvent for this to happen.

According to the notice, Moybrone will propose Ronan Duffy of McCambridge Duffy of Northland Road, Derry, as liquidator. It will be open to creditors to nominate their own candidate if they wish.

The notes to the accounts state it lost money that year and in previous years, but that the directors believed it would make a profit over the succeeding 12 months.

Efforts to contact Moybrone Holdings and Paul Cooke Auctioneers on Thursday for a comment were not successful.