New rates kick in next month, with estimates it will cut gas prices for a typical home by €31.60 a year 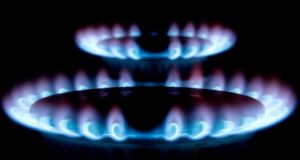 Gas prices have been falling in recent months, barring a brief rise in August sparked by a spike in demand

Bord Gáis Energy will cut natural gas prices by 4 per cent from next month, but says it will increase electricity charges at the same time.

The company, which supplies natural gas and electricity to homes and businesses around Ireland, intends applying the new rates from October 28th.

Homes that buy both gas and electricity from the company – dual-fuel customers – will typically save €14.83 a year, about €12.24 a month, Bord Gáis calculates.

“Factors beyond our control have led us to need to increase electricity prices. However, we will continue to monitor costs closely, and do all we can to ensure that our customers are receiving the best possible prices for their energy.”

Bord Gáis explained that electricity prices were rising on the back of increased carbon costs paid by all generators as part of EU climate change policy.

Similarly, the cost of using the electricity network, whose charges the Commission for the Regulation of Utilities sets and publishes, have also risen.

Bord Gáis generates electricity at a plant in Whitegate, Co Cork, and also buys power from a large number of wind farms around the country.

The company explained that it buys energy “gradually and in advance” to insulate customers from short-term price movements.

Gas prices have been falling in recent months, barring a brief rise in August sparked by a spike in demand.

Independent energy company Naturgy recently said that prices should continue falling as liquid natural gas imports from the US pick up.