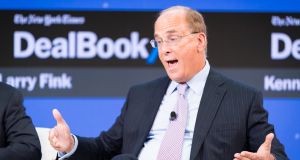 In his annual letter to CEOs posted on the company’s website on Tuesday, Mr Fink forecast a “fundamental reshaping of finance” and said companies must act or face anger from investors over how unsustainable business practices might curb their future wealth.

He also said BlackRock would “be increasingly disposed” to cast critical proxy votes tied to sustainability, and said in a separate letter to clients that the firm will, by mid-2020, sell off from its actively managed client portfolios stakes in companies that derive more than 25 per cent of their revenues from thermal coal production.

Climate activists hailed Mr Fink’s revamped stances and said they would put pressure on rivals, though some cautioned the New York-based asset manager must still back up its new rhetoric.

“As the biggest financial institution in the world, BlackRock’s announcement today is a major step in the right direction and a testament to the power of public pressure calling for climate action,” said Ben Cushing of the US-based environmental group Sierra Club, in an emailed statement. – Reuters