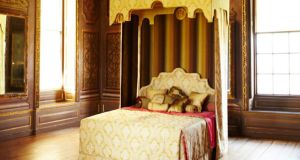 China is a booming market for luxury items, even as the economy slows, and high-end brands seem ready to cater for every waking hour of the super rich with watches, cars and jewellery.

So it was only a matter of time before someone stepped in to ensure that your average Chinese tycoon also has their sleeping hours taken car of.

This is not exactly a case of “You snooze, you lose”.

Last week the British luxury brand, Savoir Beds, launched the limited edition “Savoir Royal State Bed” in Beijing. Selling at 1,186,600 yuan (€146,175), it is said to be the most expensive bed in the world.

Apparently the bed is inspired by the ones enjoyed by British monarchs throughout the 17th and 18th centuries.

“Made to order and taking approximately 700 hours to make, the final product is a showcase for what the British do best – bespoke luxury,” the manufacturers said in a statement.

Savoir Beds, which was founded in 1905, was the bed-making arm of the world famous Savoy Hotel in London, but it was transformed after management consultant Alistair Hughes bought the company in 1997.

Crest sewn by artisans
The bed has a four-metre high headboard, supporting an elaborately scalloped canopy, all draped in imperial, red dyed silk, and a crest sewn by artisans of the Royal School of Needlework in London, who apparently did the lace motifs on Kate Middleton’s wedding dress.

“Of course it’s a massive amount of money and it will only appeal to the very lucky and very wealthy,” said Savoir Beds’ Beijing manager Peter Liu.

“But if you’re buying Gucci handbags, a suit from Saville Row or a Rolls Royce, you’re looking for the best . . . the very best.

“Furthermore, you spend a third of your life in bed so why not spend it as comfortably as possible? It’s an investment that pays off every morning of your life.”