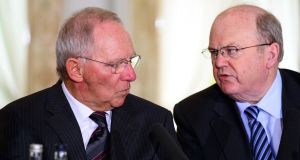 German finance minister Wolfgang Schäuble has played down the chances of an Apple tax windfall in Europe, warning that “you should never divvy up the bear skin before you’ve taken out the bear”.

The German minister, no friend of Dublin’s corporate tax model, was among those who welcomed the European Commission’s finding last week that Irish boutique tax arrangements with Apple amounted to €13 billion in illegal state aid.

While the long-serving Christian Democratic Union (CDU) politician would “naturally” welcome all extra cash to land in his lap, he said he was sceptical of the prospect of pennies from heaven any time soon.

“I think the expectations being built up there are somewhat previous,” he said, pointing out that the commission still had to explain much of the detail of its decision.

Europe is facing an “unusually complicated process that will drag on”, he said.

His scepticism is shared by his Austrian counterpart, Hans Jörg Schelling, who sees only “a very small chance” that Austria will get a slice of the Apple pie.

Not that Minister for Finance Michael Noonan’s Austrian or German colleagues would turn their noses up at the extra income. In a leaked paper, Berlin’s finance ministry warned of extra EU budget costs facing Germany in the coming years as a result of Britain’s exit from the EU.

In recent years, Britain was on average the third largest contributor to EU finances. Its departure from the bloc will create a hole in EU finances of about €10 billion a year, according to the German finance ministry.

Sharing out that burden among the remaining 27 states would see Berlin’s share of the EU budget rise from 21 per cent at present to 25 per cent – at an additional cost of €4.5 billion a year from 2019 on.

Germany is already a net EU budget contributor of €15.6 billion annually. Dr Schäuble’s officials point out that the financial hole could be closed somewhat if Britain agrees an associate membership along Norwegian lines which sees Oslo, in exchange for single market access, give Brussels the equivalent of roughly half a full membership rate.

Facing the prospect of an EU without Britain, Berlin officials have already begun examining how much of the financing gap left by Britain’s exit could be closed, in particular by tightening EU budgets. Already in their sights: the €55 billion agriculture bill.

A leading think tank has come to a similar conclusion about EU finances without Britain, noting that, in 2015, the British per-head contribution to the EU actually topped the German per-head payments.

“After the country’s departure from the EU, this will have to be distributed to the other member states,” writes Matthias Kullas of the Centre for European Policy (CEP) in a new study. “In particular the net contributors Germany, France and Italy will face considerable additional costs.”

At present Britain contributes 16 per cent of its budget but draws down less than 9 per cent of all loans.