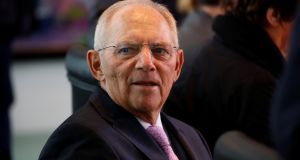 Wolfgang Schäuble, who departs the German finance ministry after eight years to become the next Bundestag president. Photograph: Axel Schmidt/Reuters

Greece and other former EU bailout countries may breathe a sigh of relief at reports that German finance minister Wolfgang Schäuble is to depart his hulking Wilhelmstrasse ministry after eight years.

In an elegant move, the 75 year-old politician, Germany’s longest-sitting MP, is to set to become the next Bundestag president, the second most senior position in the country after the federal president.

Commanding quiet respect across party lines, Dr Schäuble can derive some comfort in his final political office, in protocol terms, being one step up the pecking order above Chancellor Angela Merkel.

The two have been cordial but not close since, 17 years ago, she shafted Dr Schäuble in the midst of a political fundraising scandal to take the leadership of their Christian Democratic Union (CDU).

Dr Schäuble’s new job, agreed a week after his 75th birthday, would solve several problem at once for Dr Merkel.

It fills the vacancy left by the departure of Bundestag president Norbert Lammert at a time when, with the arrival of the far-right Alternative für Deutschland (AfD), a new president’s words will carry real weight for the six-party parliament.

His departure also heads off a tug of war over the crucial finance ministry between the CDU and the Free Democratic Party (FDP), a likely coalition partner. And a fresh face in the finance ministry – whether CDU or FDP – will no doubt be good for optics, if not dramatic a softer approach.

A new FDP finance minister is unlikely to be any warmer to French euro reform proposals than the old one. That said, the next German finance minister will have a tough job following as Dr Merkel’s pit-bull in Brussels, willing to take the hardest line possible in talks to extract the maximum concessions for Berlin before it shifted its political position.

Whether on bailouts or investment funds, Dr Schäuble was dubbed by his Greek nemesis Yanis Varoufakis as the eurogroup “puppet master who pulls all the strings”.

Blamed like no others for the politics of balanced budgets and austerity measures, Dr Schäuble refused to consider debt relief for Greece and, in July 2015, caused outrage for suggesting the debt-burdened country should think about taking a break from the euro zone.

Dr Schäuble’s reported departure severs the final political connection to the Helmut Kohl era. For years, the CDU chancellor’s trusted deputy, he chaired the negotiations for Germany’s unification treaty signed in 1990. In the end, Dr Kohl and Dr Schäuble fell out spectacularly over the CDU fundraising affair in 1999-2000 and never spoke again.