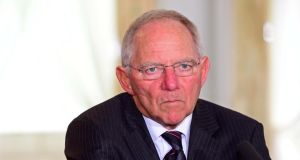 German finance minister Wolfgang Schäuble is ready to divert some of his country’s national sales and income tax takings to bankroll a new “euro budget”.

The proposal comes as an EU working group, headed by Italy’s Mario Monti, explores the idea of a euro zone “fiscal capacity” – raising a European budget from a financial transaction tax or a harmonised European corporation tax.

According to news magazine Der Spiegel, Dr Schäuble and his finance ministry officials are anxious to support the recent French revival of the long-discussed but never implemented European “economic government”.

French president François Hollande brought the proposal back into play after recent talks in Brussels on a roadmap for a third Greek bailout. Only with a “new era” of European integration could crises be averted, the French leader said, calling for “a strengthening of the currency union”.

A week after he pushed for a new “political union” in a Spiegel interview, Dr Schäuble’s officials have told the magazine they are open to a permanent source of direct funding at national level for the European Commission.

But instead of backing the French proposal of pooled sovereign bonds, the Berliners say they could envisage giving Brussels a percentage of their annual tax take. In addition, the unnamed officials told the magazine they were open to the idea of collecting a direct EU tax for Brussels.

Non-euro member states such as Britain, Poland and the Czech Republic are wary of proposals for further integration circles within EU circles. Another European player wary of Dr Schäuble’s euro tax idea is Chancellor Angela Merkel.

1 Michael O’Leary is the boss you want to lead an airline out of crisis
2 Fortnite owner signs multimillion deal to buy Irish ‘kidtech’ firm
3 Online shopping makes town centre jobs unviable, says Next boss
4 Ireland is in danger of losing the woods for the trees on emissions reduction
5 High Court told FBD staff texts discussed policies in ‘disparaging terms’
6 Air travel never going ‘back to way it was’
7 The wealth of the Irish – how do your assets match up?
8 FinCEN Files: Scale of challenge facing financial regulators revealed in leaked documents
9 Dunnes Stores set to enter grocery delivery market
10 Should I switch bank now with Ulster Bank at risk of closing?
Real news has value SUBSCRIBE