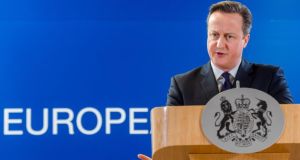 British prime minister David Cameron “is right to insist on the idea of a multi-currency union as an accurate description of the monetary framework of the EU”. Photograph: Geert Vanden Wijngaert/AP

There was, until not too long ago, a semi-rational argument in favour of a British exit from the EU. It went like this: a version of Brexit happened a long time ago when the UK decided not to join the euro and the Schengen passport-free travel area. A formal British exit would merely end something that started a long time ago.

This argument is no longer valid because the facts have changed. The influx of refugees into Germany and the terrorist attacks in France have put a de facto end to Schengen. National border controls have been reinstated in many places.

It is also clearer now than even 12 months ago that the euro zone will not turn itself into a federal union. It will reach the climax of its political and economic integration at a point that is not far from where it is today.

Supervision and resolution procedures for banks have been tightened but there will be no banking union and no fiscal union. The euro in effect has degenerated into a fixed exchange rate system. UK prime minister David Cameron is right to insist on the idea of a multi-currency union as an accurate description of the monetary framework of the EU. So, in an environment where the two main projects of integration are crumbling, there is no rational case for Brexit.

That does not necessarily improve the probability that the UK will vote to stay in the EU. Even if you consider the euro zone and Schengen dead in the water, in the past 20 years there has been a process of mutual separation and alienation between Britain and other European countries. I was reminded of this recently at a discussion at King’s College in London. The official agenda was Italy’s future in the EU. But the audience quickly turned it into a discussion on Brexit. Half the room seemed to favour leaving the EU. They were noticeably more vehement and emotional than those who wanted to stay.

A few weeks earlier, I had attended another conference in a rarefied environment with no Brexit supporters. Everybody seemed to agree that the only way for the In campaign to win would be to use utilitarian economic arguments about trade and the European single market, and even to scare voters.

Taking those two meetings together, I can see that the In campaign is at risk of losing the referendum by employing the wrong tactics. A campaign based on fear will backfire.

Referendums belong to the category of hard-to-calculate political risks. My advice would be to distrust anyone who makes a forecast on the grounds of opinion polls or some supposedly deep insight into the national character. There is one more limited prediction I am willing to make: the process will not falter in Brussels.

The substantive disagreement between Britain and its EU partners is, by the standard of European conflicts, not technically complicated. Mr Cameron wants to restrict the flow of refugees through a rule to withhold for four years in-work benefits to people newly arrived from the EU. The European institutions and a large number of member states consider this a violation of EU law.

There are fortunately various technically feasible ways around this. If Brussels is good at anything it is fixing legally intractable disputes. Member states can, for example, employ residence as a discriminating factor, link benefit payments to past insurance contributions or invoke exceptional circumstances. If you want to keep somebody out, there are ways to do it. As long as Mr Cameron wants a deal, he will secure one that is more than half-decent.

But even then it is far from clear that an agreement favourable to Britain would persuade any of the highly charged Brexit supporters I encountered to change their minds. They did not seem to care much about in-work benefits. They felt let down by the EU in a broader sense – most importantly in terms of their own personal economic security. From their individual perspective, it may be rational to vote to leave. But I can no longer see a rational pro-Brexit case for the UK as a whole.

Globalisation and European integration produced losers, including in the UK. Yet overall the country did not lose. Or, if it had, leaving the EU would not redress the problem. If Britain were to vote Out, one cannot exclude the risk of macroeconomic instability: a sterling crisis, a plunge in house prices or another Scottish referendum. True, that too is a bit of a scare story. But any rational voter will want to understand both risks and opportunities.

One potentially attractive argument is that a decisive vote for In could allow Britain to fill a political vacuum that has been opened by a dysfunctional euro zone and the demise of Schengen.

Britain could become a leader in Europe. It could be the diplomatic opportunity of a generation. – Copyright The Financial Times Limited 2015