Winner takes all is simply unsustainable, even for tech giants 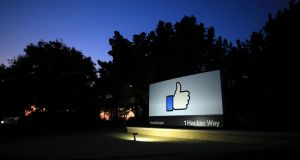 The economy might not be looking like a V but the profits and share prices of a few technology companies certainly are. The industry’s four biggest companies, Amazon, Apple, Alphabet and Facebook, reported a combined $28 billion in profits on Thursday. Photograph: Jim Wilson/The New York Times

Hopes of a V-shaped economic recovery have been dashed pretty much everywhere. That said, it is clear that activity has recovered from trough levels seen during March and April. The problem is that the growth we have seen looks patchy and is far from consistent with an early return to where we were pre-coronavirus.

In the US, in particular, there is even talk of a double dip recession thanks to the continued spread of the virus. Two recessions in quick succession lead to another descriptive letter, W. Inevitably, there are plenty of other letters in use by forecasters, particularly L and U.

I have an alternative suggestion: it is an X recovery. The top half of that letter (v) represents tech company profits and the bottom half ( ^ ) illustrates what the rest of us are experiencing.

That we have had any sort of recovery at all is the result of two main factors. First, policy, of both the fiscal and monetary kind, has played a crucial role. Second, gradual economic reopening does what it says on the tin. Without relaxation there is ongoing recession, perhaps even an exponentially accelerating one.

One crucial thing to be aware of is that the long-term consequences of economic slowdowns are much worse when recessions are long. The effects of the downturn on unemployment can take years to wear off. Sometimes they never do: once someone enters the dreaded category “long-term unemployed” it is devilishly hard for them to get back into the workforce, even if the economy is growing.

Policy has kept many people in work via wage subsidies and support for business. It’s a desperate battle to keep businesses alive until we are through to the other side of the pandemic and things begin to resemble normality. And there lies the problem: the longer this goes on, the harder it is to imagine many things ever returning to normal.

Even with existing levels of government support, some businesses are not going to reopen. Another lockdown, partial or full, will increase the number of permanently lost firms. There will come a point when your favourite pub or restaurant will shut their doors forever.

One characteristic of bankruptcies that is shared with the virus is that they can spread suddenly and exponentially. Some firms have lived the L economy: things go down and stay down.

The economy might not be looking like a V but the profits and share prices of a small few technology companies certainly are. The next time one of these businesses faces a fine for iffy tax practices can I suggest the cash, rather staying in cash, is delivered in the form of shares in the relevant company.

Apple began handing over its disputed tax (into something called escrow – a place for the money to rest while the courts decide who owns it) in May 2018. Over the course of the subsequent three months or so, it deposited a total of €14.3 billion. If, instead, it had deposited Apple shares back then, only two years ago, the courts would be determining the fate of around €32 billion.

Apple’s share price went up by 10 per cent on Friday alone last week. Even by the weird and wonderful ways of the stock market, that is simply not supposed to happen. Deserved or not, explainable or not, Apple, Amazon and a few other well-known names are benefitting from the V-shaped recovery.

If this continues, there is lots of trouble ahead. It’s a continuation of trends in place from well before the onset of the health crisis. Winner takes all. In the old days, these companies would deservedly be broken up for the monopolies that they are. They would also be under the cosh for facilitating both the polarisation of today’s politics and electoral interference.

Hauling the CEOs of some of these companies in front of congressional committees, as took place last week, is pretty tame (although did make for fascinating viewing) compared to what has happened to American monopolies in the past. Winner takes all is simply unsustainable: we do know that. What we don’t know is the manner and timing of its end. But it will end, hopefully in a controlled and rational way.

But, thanks in no small part to those very same technology companies, we do not live in rational times. Things can get revolutionary very quickly, particularly if there are armies of unemployed – or underemployed – with nothing to lose if they decide to pick up their pitchforks.

Everything is connected to everything else – often in ways that are less than obvious. That’s why economic forecasting is so hard.

Think about all the money being spent by governments in that desperate attempt to keep economies alive. Some, perhaps a lot, of that cash is finding its way into the revenues and profits of tech companies. Those massive increases in tech sales have to be coming from somewhere; the only entity doling out cash at the moment is the taxpayer via debt-fuelled government spending binges.

If the struggles of the larger part of the economy, the one where most businesses and consumers live, are seen to be benefitting, directly or indirectly, companies and individuals that are already fabulously wealthy, some of those CEOs risk being labelled as 21st century Marie Antoinettes.