USMCA agreement follows months of wrangling around decades-long trade arrangement between US, Canada and Mexico 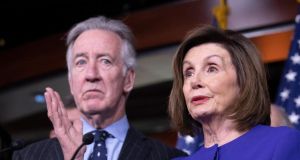 Speaker of the house Nancy Pelosi and chairman of the house ways and means committee Richard Neal during a news conference on USMCA in Washington. Photograph: Michael Reynolds/EPA

Financial markets steadied on Tuesday after agreement was reached on an USMCA deal (the United States, Mexico, Canada Agreement) – a rare piece of good news as trade tensions between the US and its trading partners weigh on the global economy.

The agreement, which will replace Nafta, a decades-long trade arrangement between the United States, Canada and Mexico, is expected to be signed by the end of the year after Democrats reached a compromise with the Trump administration on the details of the deal.

“This is a transformative agreement,” said Richard Neal, the chairman of the ways and means committee in congress which has authority over trade policy, noting that Democrats had substantially changed the agreement since it passed from the White House to Congress earlier this year.

Describing it as a “triumph for workers everywhere across America”, he said it was an agreement that Democrats had shaped, highlighting how environmental and labour standards had been strengthened.

Mr Neal and house speaker Nancy Pelosi announced the breakthrough on Capitol Hill, as the US trade representative Robert Lighthizer was en route to Mexico for a signing ceremony, which was also due to be attended by Canadian trade minister Chrystia Freedland.

The agreement was hailed by the Trump administration as a major legislative victory. President Donald Trump described it as the “best and most important trade deal ever made by the USA”.

“Good for everybody – farmers, manufacturers, energy, unions,” he tweeted, noting that it would “finally end our country’s worst trade deal, nafta!”

Nafta, which was negotiated by former president Bill Clinton, came into force in 1994. Mr Trump campaigned against it during the 2016 presidential election, arguing that it unfairly impacted on US manufacturing.

Among the changes included in USMCA are the requirement that 75 per cent of car parts should be produced in America, while 45 per cent of parts should be made by factory workers making an average of at least $16 an hour – an attempt to limit Mexico’s competitive advantage.

It also includes new provisions on dairy, expanding access to Canadian dairy markets to US farmers.

Democrats also lobbied to strengthen measures opposed by pharmaceutical and bioethics companies in a bid to cut drug prices.

Announcing the breakthrough just an hour after presiding at a similar press conference announcing articles of impeachment against the president, Ms Pelosi insisted that the timing was coincidental, noting that Democrats had to move forward with the legislation as they were approaching the end of the current legislative term.

With expectations that the new legislation will be signed off by Congress before Christmas, the development may give Mr Trump a boost with supporters – particularly in rural states who have been hit by the trade war with China – ahead of next year’s presidential election.

A new round of tariffs are due to kick in on Chinese goods on December 15th as Chinese and US negotiators continue their discussions on trade, though there are signs that Mr Trump is seeking a relatively quick deal.