When will we fly again? Nobody knows 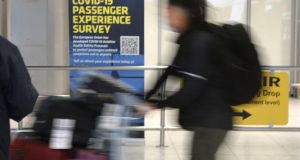 A passenger at Dublin Airport this week. The Irish tourism sector, which had hoped there might be some travellers in the second half of 2021, is facing a very difficult year.Photograph: Dara Mac Donaill 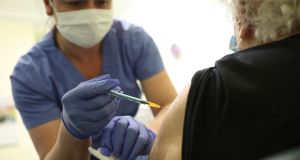 Much depends on the availability of vaccines. Photograph: EPA

It would be an understatement to say it has been a bad week for the travel sector– or at least the part of it which relies on international travel. New restrictions on travel were expected, but neither the industry nor many of its customers anticipated the warning from Tánaiste Leo Varadkar that not only was international travel unlikely during the summer, but it might not be possible by next Christmas either.

The statement has sent many people’s plans into a spin – including those who had moved summer bookings forward from 2019. But as borders tighten across the world and travel is restricted, it is clear that the risk of the spread of new variants has changed the game for international travel, for now anyhow. With the new Biden administration even considering making it mandatory for people on internal flights to have been vaccinated, and some discussion at EU level about banning tourist travel, the story is moving very quickly.

4 Q&A: Covid vaccine side effects – What are they, who gets them and why?

6 Tenant promises to pay compensation after removing rafters from house

11 Food and mood: Why nutritional psychiatry is attracting attention

15 Maternity leave during lockdown has its advantages

16 Michael McDowell: We have to stop pressing for a border poll

20 Galen Weston, owner of Brown Thomas and Arnotts, has died

21 TV View: McManaman despairs as upbeat Owen looks on the bright side

23 Covid-19 Vaccine Tracker: What's available in the Republic of Ireland and what else is coming?

29 Q&A: What now for AstraZeneca and Johnson & Johnson vaccines?

36 My ex-husband wants me to sign away my land to him. Do I have to?

39 Q&A: Which Level 5 restrictions are being lifted from today?

40 The Khmer Rouge controversy: Why colourising old photos is always a falsification of history