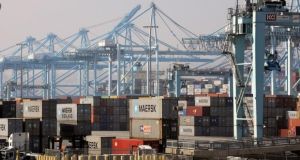 The US commerce department said imports rose by $2.2 billion in November

A drop in US exports last month pushed the country’s trade deficit in goods higher while the number of Americans filing for unemployment benefits fell last week in a positive sign for the labour market.

The two reports released on Thursday suggested that when Donald Trump becomes president next month, the labour market will likely be at roughly full strength and international trade could be weighing on the economy.

In an initial estimate that does not include trade in services, the US commerce department said America exported $1.2 billion less in November than in October. Imports rose by $2.2 billion during the month. The full trade report for November is due on January 6th.

Mr Trump campaigned heavily on promises to reduce America’s trade deficit and bring back jobs that moved abroad to countries with lower costs for manufacturing.

Working against him could be a stronger dollar which could weigh on exporters. The trade deficit for goods widened by $3.4 billion in November to $65.3 billion.

The dollar has surged about 5 per cent since Mr Trump won the presidential election as investors bet wider budget deficits under his presidency will trigger higher inflation and more interest rate increases by the Federal Reserve.

Separately, initial claims for state unemployment benefits dropped 10,000 to a seasonally adjusted 265,000 for the week ended December 24th, the US labour department said.

It was the 95th straight week that claims were below 300,000, a threshold associated with a healthy labour market. That is the longest stretch since 1970, when the labour market was much smaller.

The department said in a statement there were no special factors affecting claims last week although estimating the data can be more difficult around holiday periods. The department said the actual number of claims was estimated by government staff for 10 states.

Claims for the prior week were unrevised.

Labour market strength contributed to the Federal Reserve raising its benchmark overnight interest rate earlier this month by 25 basis points to a range of 0.50 per cent to 0.75 per cent. The US central bank forecast three rate hikes in 2017.

Economists polled by Reuters had forecast first-time applications for jobless benefits falling to 264,000 in the latest week.

The claims report also showed the number of people still receiving benefits after an initial week of aid rose 63,000 to 2.10 million in the week ended December 17th, the highest since September.