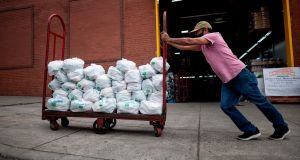 More than 25 million Americans have filed for unemployment insurance since Covid-19 began spreading across the US. Photograph: Getty

Starbucks founder Howard Schultz and more than 100 other US chief executives have called on the US Congress to deliver more support for small businesses, as talks for another round of economic stimulus stall on Capitol Hill.

The letter sent on Monday endorsed proposals advanced by Todd Young, a Republican senator from Indiana, and Michael Bennet, a Democratic senator from Colorado, which would provide low-interest, partially forgivable loans for small and medium-sized businesses damaged by the coronavirus crisis.

The Paycheck progrmme has been widely criticised after government disclosures earlier this month revealed that luxury fashion companies, law firms, venture capitalists and that Washington lobbyists were among the scheme’s beneficiaries. Small businesses have also called for a loosening of restrictions for the scheme’s loan forgiveness.

Monday’s letter comes as congressional leaders are locked in negotiations with the White House about a fresh round of economic stimulus, after enhanced unemployment benefits ran out last week.

More than 25 million Americans have filed for unemployment insurance since Covid-19 began spreading across the US, and politicians have so far failed to reach an agreement to extend the extra $600 a week in federal benefits that were introduced in March as part of the $2 trillion Cares Act.

The Washington Post reported on Monday that the White House was considering acting unilaterally if Congress could not cut a deal.

While politicians agree on the need for another round of means-tested direct payments to Americans of up to $1,200 apiece, they are at odds over an unemployment benefit extension, as well as legal protections that would prevent employers from being held liable for workers who get infected on the job.

Democrats want the unemployment top-up to continue through next year, while Republicans have argued that too many Americans are now earning more from benefits than they were at work.

Republicans, namely Senate majority leader Mitch McConnell, have led the charge on so-called “liability shields” for companies, schools and charities, while Democrats have pushed for more legal protections for workers.

The letter’s signatories include chief executives of large companies such as Alphabet and Walmart, several executives from the struggling hospitality industry and several who have sat out other letter-writing campaigns, such as Facebook chief operating officer Sheryl Sandberg.

It is likely to pile pressure on Congress from a business community that has grown more concerned about the outlook for the US economy as infection rates climb.

The Business Roundtable, one of the leading lobby groups in Washington, called last week for the next phase of stimulus legislation to include targeted aid for the hardest-hit individuals, while pitching unemployment benefits at a level to encourage a return to work and limiting companies’ liability if sued by individuals who contract Covid-19 on their premises.

Mr Schultz has had only an emeritus role at Starbucks since 2018. He explored a run for the presidency as a “centrist independent” but abandoned his campaign last September, saying he feared splitting the Democratic vote and handing Donald Trump another four-year term. – Copyright The Financial Times Limited 2020