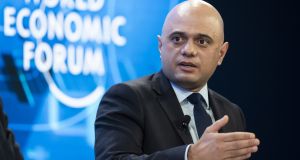 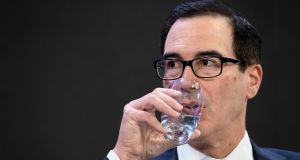 UK chancellor of the exchequer Sajid Javid said on Wednesday in Davos that his government will focus on securing a trade deal with the EU over the US, as it faces into talks with Donald Trump’s administration amid threats over digital taxes.

“Our first priority is getting an agreement with the EU,” said Mr Javid, who got around prime minster Boris Johnson’s ban on his ministers joining the global elite at the World Economic Forum (WEF) conference. “The timetable is the end of the year, but it can absolutely be done.”

The UK is set to begin official trade talks with both the EU and US after Brexit takes effect at the end of January. However, speaking on the same panel, US treasury secretary Steven Mnuchin issued a thinly-veiled threat to Mr Javid as Downing Street sticks to plans to introduce a digital tax in April.

“We’ll be having some private conversations” on the UK plan, Mr Mnuchin said, nodding at Mr Javid. “I’m sure the president and Boris will be speaking on it as well.”

He added: “We’re pretty clear that the digital tax is discriminatory. If people want to put taxes arbitrarily on our businesses, we’ll consider arbitrarily putting taxes on car companies.”

The once-powerful UK car industry suffered a number of blows in 2019 as production declined and manufacturers shut down plants temporarily as Brexit deadlines came and went. Jaguar Land Rover is planning to cut thousands of jobs, Honda aims to close its only British factory in 2021, and Nissan has abandoned plans to build its largest SUV model in Sunderland.

French president Emmanuel Macron averted a trade war with the US by agreeing, on a call with Mr Trump on Monday, to hold off on imposing a 3 per cent digital tax, mainly targeting US tech giants such as Facebook, Google and Amazon, to give the Organisation for Economic Cooperation and Development (OECD) a chance to secure an international agreement on the highly-contentious issue.

Meanwhile, Mr Javid stuck rigidly to his government’s line of rejecting Brussels’ insistence that London sign up to “a level playing field” on how goods are produced in the UK and EU to secure a trade deal.

“There’s no point in leaving the EU and sticking with its rules and regulations forever,” Mr Javid said, noting that his country is leaving both the single market and customs union.

Following the meeting, Mr Trump said that the US would consider imposing tariffs on European car imports if both sides couldn’t reach an agreement.

“If we’re unable to make a deal we will have to do something, because we’ve been treated very badly as a country for many, many years on trade,” Mr Trump told reporters.

Last week, the US agreed a phase-one trade deal with China following an 18-month stand-off, while the Senate backed new US-Mexico-Canada pact will be felt by citizens towards the end of the year.

“It is very good that there is now a truce and a pathway to peace,” International Monetary Fund (IMF) managing director Kristalina Georgieva said on Wednesday’s panel with Mr Mnuchin and Mr Javid.

1 Eason acquires rival Dubray Books for undisclosed sum
2 Solar panels: Are they worth the investment?
3 Bank leaked my loan request to family who tried to rip me off
4 When the Chemistry no longer works – the closing of a leading Irish ad agency
5 Ryanair and Aer Lingus monitor impact of coronavirus on travel to Italy
6 Stock markets tumble into the red for second straight day
7 Boris Johnson's new immigration regime will damage much more than industry
8 Revolut valued at $5.5bn after latest fundraising
9 Mastercard to create 1,200 new jobs by expanding base in Dublin
10 Up to 5,000 engineering jobs expected to be created in 2020
Real news has value SUBSCRIBE