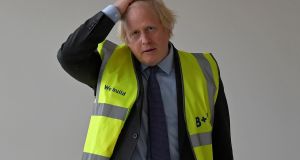 Britain’s Prime Minister Boris Johnson will set out a plan to speed up recovery on Tuesday. Photograph: Toby Melville/pool/AFP via Getty Images

Britain’s economy shrank by the most since 1979 in early 2020, according to figures on Tuesday that included the first few days of the coronavirus lockdown.

The Office for National Statistics said gross domestic product dropped by a quarterly 2.2 per cent in the first three months of 2020, below the median forecast in a Reuters poll of economists for a fall of 2.0 per cent.

Prime Minister Boris Johnson will set out his plan to speed up the British economy’s recovery later on Tuesday when he will promise to fast-track £5 billion of infrastructure investment.

The ONS also said Britain’s current account deficit widened by more than expected in the first three months of 2020.

The balance of payments deficit – a long-standing concern for investors because it leaves Britain reliant on foreign inflows of cash – grew to £21.1 billion in the first quarter, compared with a median forecast of £15.4 billion in a Reuters poll of economists. – Reuters