Smart Money: How inflation is affecting your personal standard of living 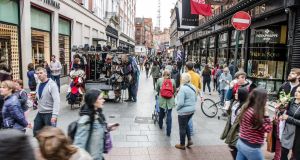 The feelgood factor from this period of economic growth is not evenly spread. Photograph: Getty

One of the stories of the economic recovery has been that consumer prices have remained almost flat. On average. The qualification is vital. The “basket” of goods and services used to measure price rises is, of necessity, an average. The fact that it has increased by only 1 per cent over the past year, and wages on average have risen by some 3 per cent, means that people in work are better off. On average. And so the election takes place as a rising economy lifts many boats and this is a vital backdrop to the debates on tax, spending and services.

But the average hides enormous variations. And those who spend a significant portion of their incomes on housing – especially rent – and services such as childcare and education, have seen steeper price increases in recent years . And so the squeezed middle – younger families renting or with big, newly minted mortgages – is a reality.