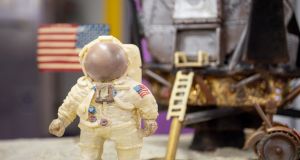 Image of the week: Chocolate moon

Tomorrow marks 50 years since Neil Armstrong beat Buzz Aldrin by about 20 minutes to become the first man on the moon, so understandably, given both the immenseness of Nasa’s achievement and the desolate state of affairs on present-day Earth, lots of people have been happy to celebrate the anniversary. Enter Cadbury, proving that while making chocolate isn’t technically rocket science, it can sometimes incorporate a dash of it.

At Cadbury World in Bournville, Birmingham, the scene of the Apollo 11 moon landing has been faithfully recreated in an 18kg chocolate display thanks to five days of painstaking work by Dawn Jenks and Donna Oluban. The Cadbury moon itself is made of white chocolate, obviously, but is it “fine and powdery” as Armstrong described the surface he walked on?

27 Months since sterling was as weak against the dollar as it managed on Tuesday, with its plummet versus both the US currency and the euro following efforts by both Boris Johnson and Jeremy Hunt to harden their Brexit bluster.

50 Percentage chance being priced in by money markets of a Bank of England interest rate cut later this year in order to manage its way out of a potential no-deal economic crisis.

$5.7 billion Speculators have increased their bets on the pound falling to the tune of this sum, according to data from the Commodity Futures Trading Commissions. These short positions rose in each of the four weeks to July 9th.

Getting to know: Riccardo Tisci

Riccardo Tisci has been creative director of Burberry for just over a year and it seems both his creativity and his direction is going quite well for the luxury goods group.

Tisci’s collection for the one-time check-obsessed retailer already generates half of Burberry’s sales, according to its earnings update this week, with Chinese millennials proving fans of Tisci’s monogram design, based on the initials of founder Thomas Burberry.

As a result, Burberry conjured up a surprise 4 per cent rise in revenues in the second quarter. The Italian designer (44) previously worked for Givenchy, which used to be headed by current Burberry chief executive Marco Gobbetti. He had been rumoured to be heading to Versace before detouring to London to give Burberry the wardrobe refresh it needed – or, as Vogue put it, while predecessor Christopher Bailey “trumpeted heritage”, Tisci “celebrates hedonism”. Don’t we all?

#Jobfairy: Christine Lagarde has resigned as managing director of the International Monetary Fund (IMF) to take up the position as president of the European Central Bank. But who’s in line to replace her? This lot, maybe.

1. Mark Carney The IMF post has traditionally gone to a European and Carney, soon to leave the Bank of England, is Canadian. He does, however, hold an Irish passport thanks to a hat-trick of Irish grandparents.

2. Jeroen Dijsselbloem The former Dutch finance minister, who once did “business economics research” for a few months at University College Cork, is also in the frame.

3. Mário Centeno The Portuguese finance minister is the current “Mr Euro”, meaning he leads the group of euro zone peers known as the eurogroup. He’s also been mentioned as a possible Lagarde successor.

4. Olli Rehn The Bank of Finland governor, a former European Commissioner for all the economic stuff, has criticised the IMF in the past, but his name is now firmly on speculators’ lists.

5. Kristalina Georgieva The Bulgarian number two at the World Bank is so European, she’s a former winner of the title “European of the Year”.