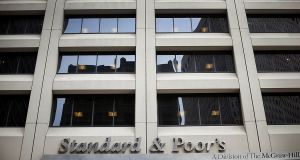 Tthe leading debt ratings agency upgraded Ireland in November to an AA rating for the first time since the Republic applied for an international bailout in 2010.

Standard & Poor’s has said Ireland’s credit worthiness is unlikely to be affected by a snap election, as the State’s low-tax and open economy is set to remain unchanged in the near-term by the outcome of the vote.

Still, the leading debt ratings agency, which upgraded Ireland in November to an AA rating for the first time since the Republic applied for an international bailout in 2010, highlighted potential medium-term pressures to the economic model.

Taoiseach Leo Varadkar announced on Tuesday that a general election would be held on Saturday, February 8th, just over a week after Brexit takes effect and before talks begin in earnest between the UK and the EU on a future trade agreement.

“Our base-case assumption is that, regardless of the election outcome, the Irish economic model – combining low tax pressure, openness to immigration and trade, flexible labour and product markets, and a commitment to put Ireland’s elevated debt on a downward trajectory – will remain intact,” S&P said.

“Pressure could increase over the medium term with respect to, for example, the floundering health care system, house price inflation, or rising budgetary reliance upon historically high corporate tax receipts.”

S&P noted that the Government has “recognised the risks” in the considerable concentration of the tax base, whereby 45 per cent of Ireland’s corporate tax receipts come from just 10 multinational companies.

“These receipts may be particularly sensitive to what appears to be a weakening global business cycle, or further tax policy shifts in the US and UK,” it said, noting that the Government has set up a rainy day fund to help the State cope with economic shocks.

Strong economic growth in recent years – driven by the activities of the likes of Apple, Google and Pfizer in the Republic – has seen the Government debt burden fall from a peak of 123 per cent of gross domestic product (GDP) in 2013 to just under 60 per cent. Still, borrowings remain about 100 per cent of the underlying economy, measured as GNI, or gross domestic income excluding the impact of multinationals.