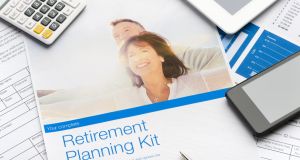 The current age of retirement leaves the public finances on an unsustainable footing, according to the State’s budgetary watchdog. File photograph: Getty Images

The current age of retirement leaves the public finances on a vulnerable and unsustainable footing and should be pushed out to reflect increasing levels of life expectancy, the State’s budgetary watchdog has warned in a major new report.

The “pension time-bomb” has been flagged before, and the last government announced plans to increase the age of retirement to 67 next year and 68 in 2028, but encountered significant political and social blowback before it became a major issue during the general election campaign.

The issue resurfaced during talks on a programme for government, with Fianna Fáil keen to retain the State retirement age at 66. While this was resisted by Fine Gael, the parties agreed to defer the issue for a year, pending a report from a newly established pensions commission.

However, the IFAC report warns that failure to increase the pension age as planned in 2021 would cost €575 million annually, with that figure rising over time.

The report notes that older people will soon represent a much higher proportion of the population, with the share of ages over 65 almost doubling from 14 per cent in 2020 to 27 per cent by 2050. Furthermore, life expectancy at 65 is expected to rise from 85 now to 89 by 2050.

“This would leave the public finances on a vulnerable and unsustainable path”, unless action is taken, the report warns. “The ageing of Ireland’s population has major implications for public spending on pensions, health and long-term care.”

The warning comes as borrowing and the national debt soar due to the Covid-19 crisis and underlines longer-term risks which IFAC says need to be acted on soon.

Under current polices, IFAC says government spending on pensions would rise from current levels of 7.7 per cent of gross national income (GNI) – which is gross national product with the impact of multinationals stripped out – to 11.7 per cent in 2050.

Speaking at the launch of the report yesterday, IFAC acting chairman Sebastian Barnes said it was important that the Government “not take decisions that bind them or commit to things that are unhelpful over the next five years”, and called on it to implement its findings.

“I think it is important to go beyond just having reports and analysis and setting out plans,” he said. “I think really delivering on a credible plan for the medium term as to how these problems are going to be addressed is important.

“While in the short term there are going to be more urgent priorities around Covid-19, these pressures will come on fairly soon … Action is going to have to be taken. If not, the country risks facing much harder decisions down the line.”

In the report, IFAC presents a model whereby people would work an additional eight months for every extra year of life expectancy. This scenario, Mr Barnes said, would mean pushing the pension age out to 69 by the period 2035-2040.

The report argues that ageing pressures mean the cost of maintaining existing services levels each year would “exceed the available fiscal space” – effectively the income available to the State for new measures – by an average of €1.7 billion per year by the early 2030s.

“The cost of standing still in policy terms will increase at a faster pace than fiscal space generated by growth from 2026,” the report says. “This would require offsetting tax and spending measures.

“Without policy changes, spending growth will outstrip the rise in revenues, leading to large budget deficits after 2025.”

The report suggests pension pressures also could be managed by reducing benefits through indexing to prices rather than wages, or by raising PRSI contributions. “Given the scale of the challenges, a combination of measures is likely to be needed,” it says.