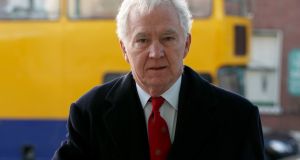 A new home planned by former Anglo Irish Bank chairman Seán FitzPatrick will negatively impact the residential amenity of nearby existing dwellings according to an objection to the plan.

Neighbour Fintan Graham has lodged an objection against the FitzPatrick application for Farmlane, Greystones with Wicklow County Council.

Last month Mr FitzPatrick and his wife, Caitriona, lodged plans for a house which is to have four bedrooms, including two en suite, at ground level with each bedroom having access to an external terrace.

At first floor level the dwelling will comprise an entrance hall, family room, living room, kitchen/dining room and will have access to an upper terrace,

The new house will replace a single-storey, fire-damaged dwelling known as Meadow Garden.

The FitzPatricks held on to their home, Camaderry, next to Greystones Golf Club after Mr FitzPatrick was declared a bankrupt in 2010 with debts of €147 million and assets of €47 million in the wake of the collapse of Anglo Irish Bank.

Mr Graham’s single storey property, known as The Spinney borders the Meadow Garden site and he has told the local authority that the planned first-floor “will greatly reduce the current level of privacy and negatively impact the residential amenity of existing dwellings”.

Mr Graham said the proposed balcony design is elevated by 1.6 metres above the floor level of The Spinney and 3.8 metres above the garden level “with its consequent repercussion for privacy and amenity”.

Mr Graham claims that “the proposed upper floor balcony is such that it will be conducive to people attending social events to gather on it with the consequent emission of intrusive noise into my property”.

Mr Grahamsaid he is pleased to see the derelict site being the subject of a planning application but that he wishes to object to certain aspects of the proposed design.

A chartered engineer, Mr Graham said no technical or engineering reason has been provided in the planning application to justify the elevated nature of the proposed build and upper balcony.

He said the consequent impact of this on privacy is at odds with the stated intention in the planning report lodged with the application that “both the applicant and neighbouring properties continue to enjoy the heightened sense of privacy which is expected in the area”.

Mr Graham claimed the proposed two-storey construction with surrounding balcony on the upper floor does not respect the elevation of existing residential units.

“lt is not clear if this includes the many verandas or covered areas included in the design. Rough measurements from the drawings supplied indicate that the covered floor area is c. 400 sq. metres, ” Mr Graham said.

Ross and Elaine McParland live next door to the FitzPatrick-owned site and in a submission lodged with the council they said: “We earnestly seek the good offices of the planning authority to carefully adjudicate if the proposed layout and design of this proposed residence is fair and reasonable having regard to privacy at our adjoining home, Rosella.”

“We have endured an awful neglected site beside us for over ten years and so warmly welcome its development, ” they added.

Planning consultant for the FitzPatricks, Kevin Hughes has told the local authority the proposed dwelling “has been designed to the highest quality, in terms of scale, height, massing and finishing materials, to ensure that there is no detriment caused to the amenity of adjoining neighbours or the character and appearance of the area”.

The new house proposal is to replace an existing derelict cottage and Mr Hughes said that “the development will allow for the more efficient use of land and, due to its location, scale and design, will not give rise to any significant negative impact on the visual amenity of the immediate area”.

Mr Hughes has also told the council that the proposed house “due to its distinct form and high-quality design demonstrates how merging contemporary designs within an area defined generally by older period houses can successfully achieve an attractive and high quality result with minimal visual impacts and preserve the built environment”.

In May, 2017 Mr FitzPatrick was acquitted on criminal counts of allegedly misleading Anglo’s auditors about tens of millions of euro in loans concealed from the public between 2002 and 2007.

He resigned as chairman of the bank in December, 2008, almost a month before it was nationalised, after the true extent of his loans, amounting to around €122 million, were disclosed by the bank.

A decision is due on the planning application next month.