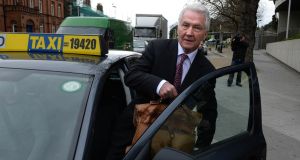 Wicklow County Council has told Seán FitzPatrick and his wife that their plan ‘has the potential to result in new and significant overlooking of adjoining properties’. Photograph: Dara Mac Dónaill

Wicklow County Council has warned former Anglo Irish Bank chairman, Seán FitzPatrick that he is unlikely to receive planning permission for his new home if he cannot address concerns over privacy.

The warning forms part of a three-page letter from the local authority to Mr FitzPatrick and his wife Caitriona FitzPatrick which has put their plan for a house on Farm Lane, Greystones on hold.

In the letter the council requested further information on the proposal after next door neighbour Fintan Graham expressed privacy concerns.

The planning authority has told the FitzPatricks that their plan “ has the potential to result in new and significant overlooking of adjoining properties”.

The council highlighted the proposed home’s extensive glazing at first floor level, the inclusion of first-floor terraces and proximity to site boundaries.

The council has asked the FitzPatricks to show that the development will not have a significant impact on the residential amenities and privacy of adjoining properties.

The council also requested a detailed photographic survey which clearly demonstrates the views that will be available from the proposed dwelling and terraces.

The FitzPatrick site is accessed from Farm Lane and the council observed that this was a “a substandard private laneway that cannot accommodate additional traffic movements without appropriate upgrade works”.

The council said it was concerned that the lane would be further degraded during the construction phase.

The council has requested the FitzPatricks to submit full details of all works proposed on Farm Lane or directly adjacent to it, including details of all restructuring works and works required for the management of surface water on the lane. It also asked the FitzPatricks to demonstrate that they have sufficient legal interest over the laneway to carry out the proposed works.

The FitzPatrick plan consists of four bedrooms, two of which would be en suite, at ground level with each bedroom having access to an external terrace.

At first-floor level the dwelling will comprise an entrance hall, family room, living room, kitchen/dining room and each of the habitable rooms will have access to an upper terrace that will provide additional amenity space.

The new home is to replace a single-storey, fire-damaged dwelling known as Meadow Garden.

The FitzPatricks held on to their home, Camaderry, next to Greystones Golf Club after Mr FitzPatrick was declared bankrupt in 2010 with debts of €147 million and assets of €47 million in the wake of the collapse of Anglo Irish Bank.