Schäuble will be elected on Sunday but will he be finance minister? 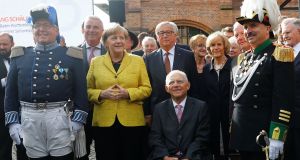 When German voters go to the polls on Sunday, one result is certain: Wolfgang Schäuble will be returned to the Bundestag, where he has been a member since 1972, for a record 13th term.

Less certain is whether he continues as federal finance minister, the influential cabinet post he has held since 2009. The flinty Dr Schäuble – loved at home and loathed in many euro countries – has made it clear that he would like to stay on in the finance ministry, housed in a hulking Nazi-era building in Berlin.

But Germany’s liberal Free Democrats (FDP) have made the finance ministry their price for forming a coalition with Chancellor Angela Merkel, presenting a dilemma to her as leader of the Christian Democratic Union (CDU) in her hunt for a parliamentary majority.

On Monday, she took a break from her election campaign to attend his 75th birthday celebration in his southwestern constituency of Offenburg. Praising him as a “heartfelt European” and “passionate parliamentarian”, Merkel expressed her “heartfelt thanks” for his role in drafting Germany’s unification.

But her praise for his impressive past is no guarantee of his political future. The liberal FDP, jockeying for an influential role in Germany’s next government, is determined not to repeat the mistakes of its last term in office.

In 2009, then FDP leader Guido Westerwelle demanded the foreign ministry and allowed the CDU put Schäuble in finance. Without any control over the pursestrings, the FDP failed to push through its tax cut campaign promise and crashed out of the Bundestag four years later.

Once again promising tax cuts and greater education spending, party board member Alexander Hahn has warned: “The FDP should not enter any government in which they do not put up the finance minister.”

FDP leader Christian Lindner has not been as explicit, though he signalled in a weekend interview that he views the finance ministry – with its cabinet veto and close involvement in EU affairs – as the “only ministry at eye-level with the chancellery”.

Given that naked ambition, Merkel may yet have to find a way to compliment Schäuble out of the finance ministry without it looking like a second betrayal. After cutting her teeth as his CDU general secretary, she shafted him in 1999/2000 over his role in a party fundraising scandal.

A reconciliation of sorts followed when she appointed him to her first cabinet in 2005 as interior minister. From 2009 on, Schäuble earned her absolute trust as her hardliner in euro crisis talks, in particular with Greece.

Despite their mixed history, Schäuble has been unfailingly loyal to the chancellor – though he likes to keep her on her toes with the occasional swipe at her policies.

“He radiates calm even in the most hectic situations,” she noted, presenting him with a birthday present: the collected writings of Dietrich Bonhoeffer, the Lutheran priest and theologian murdered in a Nazi concentration camp in 1945.

Eyeing the 17-volume collection Schäuble’s wife, Ingeborg, muttered: “That should keep you going.”

1 Oxford Covid vaccine trials offer hope for elderly
2 Ulster Bank to introduce new card payment controls on app
3 How much state pension will I get next year?
4 Hurrah for the companies giving staff more time off
5 Sustainable investment: How your pension can help tackle climate change
6 RTÉ to seek 70 voluntary redundancies as ‘large costs’ beckon in 2021
7 Apple planning updates to its AirPods earbuds next year
8 How long can Government afford to keep State pension age at 66?
9 Covid-19 will worsen shortage of accountants, says CPA Ireland
10 Aryzta to pursue asset sales as takeover talks fail
Real news has value SUBSCRIBE