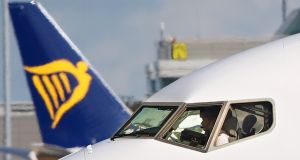 Holiday makers face potential disruption next month as Irish-based Ryanair pilots ballot for strike in a row over pay. Members of the Irish Airline Pilots’ Association met on Tuesday over the carrier’s lack of response to a pay claim they submitted in February. Barry O’Halloran reports on the growing industrial relations turbulence at airlines this summer.

State company Bord na Móna lost almost ¤50 million in the 12 months to the end of March, figures published today will show. The news comes following planners’ refusal to allow the redevelopment of the ESB electricity plant at Shannonbridge, Co Offaly, in a move that could hit jobs at Bord na Móna, which supplies fuel to the power station.

Irishman Con Conlon has sold the technology company he founded in India 15 years ago to the London-listed Dods Group for €25 million. Conlon, who hails from Ballinamore, Co Leitrim, talks to Charlie Taylor about his success to date and plans for the future.

The Central Bank incoming governor, Gabriel Makhlouf, is understood to have assured Minster for Finance Paschal Donohoe as they met in person for the first time last week, that he will address his controversial handling of a security breach in New Zealand when he takes office in September.

There are concerns in the North over the future of Harland and Wolff. The historic Belfast shipyard which built the Titanic, has fallen silent and could close its doors for good as early as next week.

Meanwhile unions representing workers at Wrightbus in Ballymenaare concerned over news that the company is seeking a new investor. The company that built the “Boris Bus” for the new UK Prime Minister when he was mayor of London, last year warned that it was experiencing difficult conditions in the UK market.

On a more positive note for the North, it’s now reckoned the economic benefit worth from hosting the Open at Royal Portrush gold club could reach £100 million.

Finally, in this week’s Bottom Line column, Ciarán Hancock assesses the chances of a return to banker bonuses.