Retail sales jump 3.3% on back of strong car sales 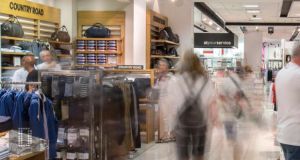 Retail sales jumped by 3.3 per cent last month on the back of strong car sales.

However, when the volatile motor sector is excluded there was a decrease of 0.1 per cent in sales for January, suggesting consumer spending remains erratic.

The latest figures from Central Statistics Office (CSO) show sales have risen by 4.8 per cent on an annual basis.

The sectors with the largest month-on-month volume increases were motor trades, which rose 4.5 per cent, “other retail sales” (4 per cent ), and furniture and lighting (3.9 per cent).

In contrast, the sectors with the largest monthly decreases were food, beverages and tobacco, which fell 6.3 per cent, pharmaceuticals and cosmetics (-6.3 per cent) and department stores (-3.2 per cent).

Alan McQuaid from Merrion Stockbrokers said: “Consumer spending remains erratic on a monthly basis though on a year-on-year comparison it is well up on the same time of the previous year, which is encouraging.”

“Although there is still a general air of caution among consumers, there seems to be a view that the worst is over following the downturn of recent years.”

The figures also show there was an increase of 2.9 per cent in the value of retail sales in January compared with the previous month, and fell by 5.5 per cent on an annual basis.

Goodbody economist Dermot O’Leary said: “ A combination of factors, including the end of austerity, an improving labour market and bolstered confidence suggest consumer will stage an improved recovery in 2015.”

The figures also show there was an increase of 2.9 per cent in the value of retail sales in January compared with the previous month, and an annual increase of 5.5 per cent.

If motor trades are excluded, there was a monthly decrease of 0.1 per cent in the value of retail sales and an annual increase of 0.9 per cent.