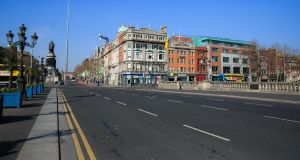 The Irish economy will fall into recession this year, shrinking by as much as 7.1 per cent as a result of the coronavirus crisis, the ESRI has predicted. Up to 350,000 people are also expected to lose their jobs, a sixth of the working population, reports Eoin Burke-Kennedy.

In his analysis, Eoin writes that the most frightening aspect is that the ESRI fears this scenario may be “too benign” to capture the full scale of the assault.

As the Dáil debated emergency measures to tackle the crisis last night, an employers’ group threatened to advise its members to ignore the State’s scheme to cover 70 per cent of laid off workers wages, unless problems with the legislation were fixed. The Law Society also wrote to the Government on Thursday expressing “major concern” over the proposals. Mark Paul reports.

In the biggest insight yet into the economic toll the pandemic is already inflicting on the US, the number of Americans filing for unemployment benefits surged to a record 3.28 million last week.

Penneys is withholding rent on its 37 stores in the Republic as part of a wider move by the clothing retailer to suspend payments to landlords during the crisis.

British pub chain JD Wetherspoon has suspended payments to its suppliers in the Republic until its pubs reopen after the coronavirus crisis.

In his Caveat column, Mark Paul considers Wetherspoon’s panto-villain chairman Tim Martin, who has committed a series of faux pas as the coronavirus crisis has unfolded, but argues Mark, may have the last laugh.

Aer Lingus is laying off more than 60 contract workers who argue they qualify for Government payments to businesses that keep staff in jobs during the Covid-19 crisis, reports Barry O’Halloran.

In this week’s business agenda, Joe Brennan explains why the crisis sounds a death knell for dividendsas companies try to save cash.

In the midst of so much bad news, it was odd to see that the number of visitors to the Republic rose by 4.1 per centlast month despite the spread of Covid-19 to Europe.

In planning news, the operator of Dublin airport, DAA, has secured planning approval for amendments to its plans for a ¤320 million new runway, despite objections from the representative body of airline pilots.

Meanwhile, planning permission has been granted for a new development of almost 500 homes and a neighbourhood centre on a former CIÉ site in Cabra.

1 Lockdown exit: How can Irish economy reopen without big health risks?
2 Property market has not felt full impact of Covid-19, warns Sherry FitzGerald
3 I want to change my will quickly in case I fall ill. Do I need a lawyer?
4 Business Post cuts pay for staff by up to 15%
5 Facing economic meltdown ... and nothing wrong with our economy
6 German fund closes €93m Harold’s Cross build-to-rent deal
7 Tesco says coronavirus costs could reach €1bn
8 Government announces €1bn in supports for small businesses
9 Q&A: Where do we stand on mortgage holidays and payment breaks?
10 ChangeX urges people to join €1m community action plan
Real news has value SUBSCRIBE