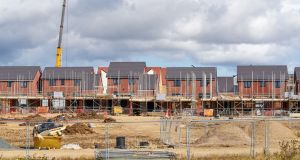 The decision means that people who bought a new home since 2013 are still not liable to pay the tax. Photograph: iStock

Minister for Finance Paschal Donohoe has again deferred the revaluation date for the local property tax (LPT), meaning that anyone who bought a new build since 2013 will remain outside of the LPT net for at least another year.

Properties were due to be revalued for this tax in November, which would have led to changed payments next year. Mr Donohoe has decided to defer the valuation date until November 1st 2021, meaning homeowners that do pay LPT will not be faced with increased bills next year as a result.

The decision means that people who bought a new home since 2013 are still not liable to pay the tax. There are several other exemptions for the tax including those properties that were unsuitable for use as a dwelling in 2013. This means that if it wasn’t habitable as of 2013, the property would never have been liable for LPT.

Early next year, Mr Donohoe will bring forward legislation for the LPT to revise the system so that most homeowners won’t face an increase in any event. The legislation will also bring new homes which are currently exempt into the system.

“As with many aspects of our economy, the pandemic has introduced volatility into the residential property market, and I am also conscious of the need to allow sufficient time for the Revenue Commissioners to introduce the necessary changes to the LPT regime before any new valuation date,” said Mr Donohoe.

Following a review of the tax in 2015 by Dr Don Thornhill, it was proposed that the revaluation date be postponed from 2016 to 2019. A further review was initiated by Mr Donohoe in 2019, deferring the valuation until November 2020.

The valuation date is the date on which property owners need to establish the market value of their properties. Those values are the basis for calculation of LPT liability. Properties are still being valued on the 2013 date.

A 2019 review of the LPT suggested that the Government should consistently target a yield of about €500 million from the tax. The group recommended that the rate applying to properties worth in excess of €1 million should remain at 0.25 per cent.

“I will be bringing forward proposals for primary legislation to implement the programme for Government commitments on LPT in early 2021. These proposals will be designed to ensure fairness and that most homeowners will face no increase in their LPT liabilities,” added Mr Donohoe.