Property prices down 0.5% in year to July

Residential prices down 1.3 % in Dublin but 0.2% higher outside of the capital 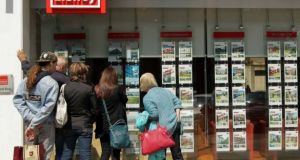 The highest house price growth in the capital was in Dún Laoghaire-Rathdown, up 1.3 per cent.

Residential property prices fell by 0.5 per cent across the State in the year to July, new figures from the Central Statistics Office (CSO) show.

In Dublin, property prices were down 1.3 per cent, with house prices falling 1.3 per cent while apartments rose 0.4 per cent.

Outside the capital, property prices were 0.2 per cent higher in the year to July.

The highest house price growth in the capital was in Dún Laoghaire-Rathdown, up 1.3 per cent. Dublin city recorded the biggest decline, down 2.07 per cent. Outside Dublin, the largest rise in prices was the southwest, up 4.3 per cent, with the southeast recording a 1.6 per cent decline.

Property prices in the Republic have increased by 83.5 per cent from their trough in early 2013, but are still 17.7 per cent lower than their highest level in 2007.