Brexit creates uncertainty for Irish company, which has operations on both sides of Border 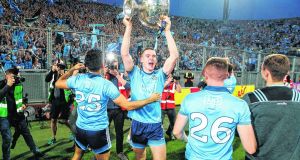 Dublin celebrate their latest All Ireland victory. The five-in-row winners tend to sell more replica jerseys than any other team. Photograph: Inpho

The shortened GAA championship season last year had a negative impact on sales of O’Neills replica jerseys as pretax profits at the main company behind the Irish brand declined by 18 per cent to €1.3 million.

Paul Towell, a director with the Dublin-based company, said “2018 was a challenging year for us on a number of fronts with the uncertainty around Brexit”.

Mr Towell said one of the challenges faced by O’Neills last year was the GAA’s decision to shorten the championship season by three weeks “which reduced the time both for producing and selling replica jerseys”.

“It also shortened the lead-in time to generate interest around the finals and coincided with the end of school holidays all of which had a negative effect on sales,” he said.

The biggest replica jersey sellers in 2018 were that year’s All-Ireland winners, Limerick in hurling and Dublin in football.

“Limerick jerseys continued to sell well in 2019 after a new jersey was launched following their All-Ireland success,” Mr Towell said.

He said the highlight for O’Neills last year was the opening of two new retail outlets, one in Derry and one in Craigavon, which incurred significant associated costs.

“We acquired a shirt factory in Derry, Smyth & Gibson, which was closing down. We were anxious to retain the skilled workforce involved. This coincided with the opening of our new retail outlet in Derry and our commitment to that part of our country.”

On the impact of Brexit, Mr Towell said: “Brexit has of course created uncertainty as we have manufacturing plants on both sides of the Border and our trucks cross the Border daily.

“Approximately 30 per cent of our 800 staff in Strabane live in the Republic and cross the Border daily. We are anxiously waiting the outcome of this week’s election in the UK.”

Accounts for the Northern Ireland company show that numbers employed increased from 559 to 632 as staff costs increased from £11.8 million (€14 million) to £13.3 million.