Politicians urged to empower businesses to ‘grow and create jobs’ 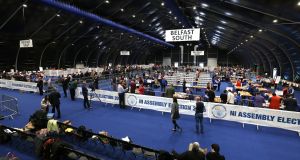 Industry leaders have urged politicians elected to the next Northern Ireland Executive to adopt a Programme for Government that empowers businesses to “grow and create jobs” and help deliver a “more prosperous economy”.

Business leaders want vote winners in the latest Assembly elections to use their mandate to also formulate a PfG that is “confident” and not encumbered by “political prejudice”.

The chairman of the Confederation of British Industry (CBI), David Gavaghan, said creating an agenda for government that is “ambitious, strategic and outcome focused” would be a key priority.

Stephen McCully, the president of the Northern Ireland Chamber of Commerce and Industry said businesses want to see more “positive momentum” and are looking for a Programme for Government that favours strength of ambition in finding solutions and is not hindered by political cautiousness or prejudice.

The new executive will be under pressure to ensure the smooth introduction of the lower rate of corporation tax to 12.5 per cent from April 2018.

Wilfred Mitchell, policy chairman for the Federation of Small Businesses (FSB) in the North, said political leaders have a responsibility to deliver for small to medium sized businesses as well as large corporates.

“SMEs, micro-businesses and the self-employed are central to the Northern Ireland economy, making up over 99 per cent of the local private sector and playing a vital role in rebalancing,” he said.

Among the key concerns of SMEs that he outlines are the “the burden of regulation”, late payments, the non-domestic rates system and the cost of energy.

“The key priority overall according to the chief executive of the Northern Ireland Independent Retail Trade Association (Niirta), is that newly elected politicians must have a “radical pro-business” agenda this time around.

Glyn Roberts said business and trade organisations need to be part of those discussions on a Programme for Government over the next few weeks to ensure that “we have a real and genuine partnership to ensure real delivery”, including a 10 per cent economic growth target as its number one priority.

“With a competitive tax regime, modernised infrastructure and investment in skills, there is no reason why Northern Ireland could not be the best place in the UK and Ireland to locate or start a business. All we need is the ambition”.