Opinion: safest course in budget would be to implement final part of Troika plan 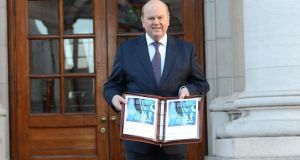 Minister for Finance Michael Noonan at Government Buildings in Dubolin before he introduced last year’s budget. The Irish Fiscal Advisory Council believes the safest course in the upcoming budget is to implement the final instalment of the fiscal consolidation plan agreed with the troika in 2011, and then follow the less demanding requirements of the National Budgetary Rule. Photograph: Dara Mac Dónaill

Various interests have been accommodated through inappropriately loose budgetary policy which led to government expenditure expanding out of step with the State’s sustainable tax base.

The expansions have then been followed by sharp forced retrenchments in bad times, leading to damaging cycles of boom and bust that have done great damage to the economy and people’s lives.

Countries such as Canada and Sweden that went through fiscal crises in the 1990s responded by putting in place strengthened budgetary institutions and policies. These effectively institutionalised the memory of the crises, allowing them to weather the global economic crisis relatively well.

Ireland has also responded to its severe crisis by formally adopting a strong set of national and European budgetary institutions. Recent Government statements in relation to pursing safe budgetary policies and avoiding boom-bust cycles could also hardly be better. But time will tell whether the deeds match the words.

It now looks likely that the target of a deficit of below 3 per cent of GDP in 2015 could be achieved with a Budget 2015 adjustment of less than €2 billion. There have consequently been numerous calls to lower taxes and raise expenditure, and the Government has signalled its intent to pursue a smaller adjustment than it had originally planned.

But we must not forget that the excess of spending over revenue is still projected to be close to €7 billion this year, and the government debt is roughly 1.2 times the size of the economy. Policy adjustments that lead to higher borrowing than under the original plan will eventually have to be paid back with interest, so the bill for any policy easing would be pushed to the future.

Identifying the appropriate fiscal stance since the crisis erupted has involved a difficult balancing act. On one side the economy was clearly operating well below its potential – especially the labour market – pointing to the need to carefully phase the required austerity measures so as to limit further negative impacts.

On the other side, Ireland’s debt was on an unsustainable path and the State lost its capacity to borrow at affordable interest rates. The availability of IMF- EU funding has allowed the Government to phase the fiscal adjustment in a way that has succeeded in rebuilding investor confidence and protecting households and businesses from a sharper contraction in demand.

Recent statements indicate the Government believes that the economy is now growing at 3 per cent, close to its estimate of the sustainable rate. The debt-to-GDP ratio has stabilised, and the State is now able to borrow at record low rates. Even so, our debt sustainability remains fragile, with debt levels among the highest of advanced economies, and there are risks the benign international financial conditions could reverse again.

The Irish Fiscal Advisory Council believes the safest course in the upcoming budget is to implement the final instalment of the fiscal consolidation plan agreed with the troika in 2011, and then follow the less demanding requirements of the National Budgetary Rule.

The move this year to a primary budget balance – ie. a balance excluding interest costs – represents a huge achievement of the adjustment effort. But it is currently projected that a primary surplus peaking at close to 4.5 per cent of GDP will be required before the end of the decade to ensure that debt falls to safer levels.

International evidence cautions that achieving such large primary surpluses is extremely difficult. It will become politically harder as crisis memories fade. In this environment it is questionable that the right course of action is to scale back to a significant degree on what was to be the last big push in the agreed adjustment plan.

Of all the new budgetary rules, the national expenditure ceilings and the associated EU expenditure benchmark are likely to be the most challenging. The benchmark requires that, in the absence of revenue-raising measures, core government expenditure must decline in real terms by 0.7 per cent in 2015 and 2016.

These constraints will be in place at a time of significant underlying demand and cost pressures, with room for manoeuvre limited by factors such as the ending of the Haddington Road agreement and the already low levels of public investment spending. The adverse effects of any overruns in spending would be compounded if revenue-raising capacity was to be eroded.

While good expenditure management will help, overall budgetary planning must recognise the extremely challenging situation that will continue to prevail on the spending side.

One positive development that may have come out of the crisis is the move to develop a budgetary framework that supports sustainable growth in incomes and employment. This framework – albeit with some defects – is now in place. But it requires broad public understanding and political commitment to work.

As we enter a crucial period in breaking the historic cycle of boom and bust, the political system must demonstrate that the lessons of past policy mistakes have been learned and will not be repeated. John McHale is chair of the Irish Fiscal Advisory Council and established professor of economics at NUI, Galway.

1 ‘No demand... because there are no people’ at well-known Dublin pub
2 Divorce: What will it cost and can you afford it?
3 Apple received $250bn dividend from Irish subsidiary in 2019
4 HSE says fix for Covid Tracker app rolled out to all Android users
5 Transferring the family farm without a tax headache
6 Nearly 30,000 could lose pandemic payment if they do not confirm eligibility
7 Bank of Ireland does U-turn after refusal to reimburse ‘smishing’ victims
8 ‘Humble’ Airbnb going back to basics
9 Post-Covid television starts to shape up – but with missing pieces
10 ComReg criticised for ignoring request to update pricing models
Real news has value SUBSCRIBE