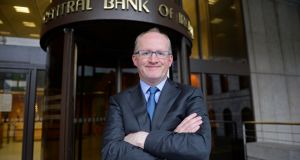 Trinity College Dublin economics professor John O’Hagan didn’t think much of it when he hadn’t heard in weeks from the third-year student he’d hired in 1990 as a research assistant to help update a chapter for a new edition of a book, The Economy of Ireland.

“He had gone AWOL. I’d accepted that some research assistants work out and some don’t,” recalls O’Hagan. “Then, some weeks later he handed me in a totally refocused and rewritten chapter. The only thing for me to do was put his name to it and delete my own from the chapter. I couldn’t change a sentence of it - it was that good.”

1 Ireland could lose out as France lays claim to most of €5bn Brexit compensation fund
2 Michael J Fox: ‘In the wheelchair, I’m luggage. No one listens to luggage’
3 The Crown’s Josh O’Connor: ‘I’m a republican. I’m not interested in the royal family’
4 Miriam Lord: Dramatic Al sets the stage for a dark day of reckoning
5 Two men found dead in Dublin city centre
6 Metro South may be back on table as transport plans for Dublin are reviewed
7 Alison Curtis: My guilt at not going for a second pregnancy
8 Diego Maradona dies of heart attack, aged 60
9 We have finally reached saturation point over Fairytale of New York debate
10 Keith Duggan: Through the glories and the disgraces, we were all Maradona addicts
11 Top up your pension, there’s still time
12 Covid-19: Decision time on reopening plan as Varadkar questions cross-Border travel
13 Boy (4) left in hospital for over two years due to Tusla and HSE failings, report says
14 Newton Emerson: Joe Biden’s Brexit remarks show an opportunity for unionism
15 ‘He’s Jekyll and Hyde’: The inside story of an Irish barrister and conman
16 An Post Irish Book Awards 2020: Prof Luke O’Neill wins Popular Non-Fiction Book of the Year
17 Publican blames Covid-19 as Dublin’s Dice Bar to shut for good
18 Eir chief apologises at Oireachtas committee hearing for failings in customer care
19 Rush Co Dublin is the commuter town with two beaches and easy city access
20 Fiona Reddan: Who’s afraid of Revolut? Not AIB and BOI it seems
21 ‘Being in Ireland feels like winning the lottery’: Syrians arrive after delay due to Covid
22 Andy Farrell to delve deeper into Irish squad for team to play Georgia
23 Darragh Ó Sé: Cork and Donegal went out with the wrong attitude
24 Son putting elderly dad under pressure to sign over land
25 Half hour of exercise offsets risks caused by sitting too long – WHO
26 Employers need a strong pension provider to partner with them
27 Dáil passes significant Bill aimed at mitigating impact of Brexit
28 Lahinch Golf Club runs out of its own cash after €3m Covid-19 hit
29 Shops, hairdressers and hotels expected to reopen next week
30 ‘People in Dublin can be friendly but Cavan was so much better’
31 ‘Moving overseas is daunting, but he took it in his stride’: An Irish woman walks for her dad
32 Fine Gael’s rising star Helen McEntee faces most serious crisis of her career
33 Varadkar says crossing Border may not be advised even when Covid travel restrictions lift, sources say
34 North faces ‘civil unrest’ over fears of Brexit food shortages, committee hears
35 The Irish ice-cream maker who was diagnosed with diabetes
36 Q&A: What restrictions are going to be lifted next week?
37 Carlow school principal denies girls were told not to wear revealing clothes
38 School leggings controversy: Anatomy of a social media firestorm
39 John FitzGerald: What is actually behind Ireland's economic growth?
40 The guarded words of Trevor Rees-Jones
Real news has value SUBSCRIBE