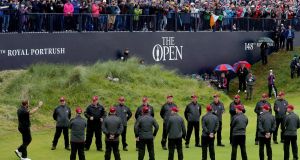 Researchers found the championship, which was won by Shane Lowry, had directly injected £45 million (€54 million) into the North’s economy. Photograph: Oisin Kendry/INPHO

The sell out 148th Open golf championship at Royal Portrush this summer delivered more than £100 million (€119 million) of “economic benefit” for Northern Ireland, according to a report commissioned by UK golf’s governing body, the Royal & Ancient (R&A).

The SIRC report also suggested that Northern Ireland had benefited from an estimated £37 million in destination marketing benefit from the more than 5,400 hours of global television coverage.

Tourism NI, the government agency which markets the North domestically, said it also estimated that Northern Ireland had further benefited from the equivalent of £23.7 million in advertising value from other media coverage in Ireland and internationally.

The SIRC report highlights that one of the biggest beneficiaries of the Open, which returned to Northern Ireland for the first time in 68 years in 2019, was the Causeway Coast council area which received a direct £26.2 million boost in spending from the golf tournament.

Martin Slumbers, chief executive of the R&A, said the championship had been a “hugely memorable week”. It attracted 237,750 golf fans to the North – a record attendance for a championship hosted outside of St Andrews.

“The 148th Open at Royal Portrush made history as the largest sporting event ever to be held in Northern Ireland and generated a substantial economic benefit,” Mr Slumbers said.

Based on research also carried out by the SIRC, Scotland’s first minister Nicola Sturgeon, speaking in December last year, said the 2018 Open had been worth £120 million to the Scottish economy.

The research showed the Scottish economy enjoyed a direct injection of £69 million from the Open and that Scotland also benefited from £51 million in destination marketing activity.

According to John McGrillen, chief executive Tourism NI, the 148th Open at Royal Portrush was a “ground breaking event for tourism in Northern Ireland”.