Number on Live Register falls to lowest since January 2008

More than 19,000 have left the register in the past year 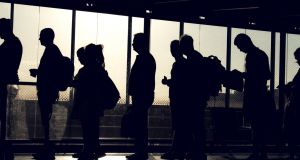 The number of long-term claimants on the Live Register in November was 68,002, 12,555 fewer than a year earlier. Photograph: iStock

The number of people on the Live Register has fallen to the lowest level since January 2008 on a seasonally adjusted basis, figures from the Central Statistics Office (CSO) show.

Over the course of the past yea, there was a 9 per cent drop in the numbers on the register with 19,200 people having left it on an annual basis.

The Live Register is not designed to measure unemployment. It includes part-time, seasonal and casual workers who are entitled to jobseekers’ benefit or allowance.

The number of long-term claimants on the register in November was 68,002, 12,555 fewer than a year earlier.

Some 61.7 per cent of all claimants on the Live Register were short-term claimants in November.

Annual decreases in the number of young people on the register have occurred every month since July 2010, with the percentage of persons under 25 on the register now standing at 10.3 per cent, up slightly on the month.

The number of people classified as out of work in the Irish economy is predicted to fall below 100,000 next year, less than a third of what it was at the worst point of the recession. The forecast came earlier this week in the wake of new figures showing the official jobless rate dropped to a 12-year low of 4.8 per cent in November. This equated to 117,800 people.