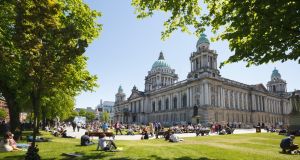 Aodhán Connolly, director of the Northern Ireland Retail Consortium (NIRC), said because people in the North have half of the discretionary income of households in Britain they “simply can’t afford costs rises” as a result of Brexit

Northern Ireland consumers will be “hit hardest” if the UK fails to secure “pragmatic solutions on future compliance and regulatory checks” in the UK-EU Brexit negotiations, a leading industry retail body has warned.

Aodhán Connolly, director of the Northern Ireland Retail Consortium (NIRC), said because people in the North have half of the discretionary income of households in Britain they “simply can’t afford costs rises” as a result of Brexit.

Mr Connolly is urging the UK government to adopt a roadmap set out in a new report published by the NIRC’s sister organisation, the British Retail Consortium (BRC) on Monday which he said would help to protect consumers in the UK and Northern Ireland.

The BRC’s “A Fair Deal for Consumers: EU Trade Roadmap” advocates a number of key “mitigations” which the retail industry group is confident could reduce the potential impact of Brexit on consumers and the industry.

These include: a zero tariff trade deal, cooperation with the EU to minimise trade friction, coordination on VAT, customs and excise procedures, advance information on new checks and paperwork and also timely construction of necessary infrastructure at UK ports.

According to the BRC, almost 80 per cent of all the food that UK retailers import comes from the EU, making the EU negotiation particularly important for these essential goods.

The industry body said these retailers now face an “acute” problem as most of this food comes through the ports of Dover and Folkestone which can handle up to 10,000 lorries every day at peak periods.

The BRC said businesses could face a “mountain of paperwork” it excessive or avoidable checks are introduced but in the meantime while the UK/EU negotiations are ongoing it is vital that the UK Government makes preparations and immediately establishes import/export processes and all the necessary infrastructure that is going to be required.

Mr Connolly said the BRC report clearly acknowledges that there is no possibility of maintaining frictionless trade between the UK and the EU but he said both retailers and consumers are facing “costs that have simply never been there before”.

“It is a simple equation that if the new costs are higher than the profit margin then either the product or that particular business model needs to change or becomes unviable,” he said.

“We also already have between 12 and 18 hours less shelf life on some products than shops in Great Britain due to our geographical location, any further delays affects availability.

“We need the UK government to work with us to deliver key mitigations that could reduce the impact on consumers and retailers. And we need a generosity of spirit from the EU to allow these mitigations to happen,” he added.