No sign of deal for Greece from Brussels talks

Tsipras criticises creditors, says his government has made compromises 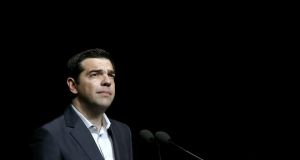 Greece failed to secure a breakthrough with lenders yesterday on a reformed bailout package despite discussions continuing between Greek officials and representatives of international creditors over the weekend in Brussels.

With the Greek government facing repayments to the IMF later this week, there were no indications of a deal last night, despite optimism from the Greek government last week that an agreement could be reached by yesterday. Economy minister George Stathakis said in an interview that he expected a deal will be found with Greece’s creditors “in a few days”.

Greek prime minister Alexis Tsipras was due to speak to German chancellor Angela Merkel and French president François Hollande last night by phone, Greek officials said yesterday, with the Greek leader expected to push for political backing for a deal.

Among the points of contention between Greece and officials representing the European Commission, European Central Bank and IMF in the technical negotiations ongoing in Brussels are pensions, labour market reform, and VAT.

Yesterday the Syriza leader appeared to lay the blame for the delay in reaching agreement with creditors. “If we have not reached an agreement with our partners, it’s not because of our intransigence or incomprehensible positions from the Greek side,” Tsipras said. “It is rather because of the obsession of some institutional representatives who insist on unreasonable solutions and are being indifferent to the democratic result of recent Greek elections.”

Noting that the Greek government had already made compromises on a number of issues, including privatisations, despite his party’s ideological opposition to the measures, he said Greece had also moved as far as it could in relation to pension reform, a key sticking-point in negotiations.

He said that Greece had committed to reducing early retirements and had agreed to integrate pensions funds, but noted that pensions had been slashed by up to 48 per cent in the past five years.

More than five years after Greece first entered an IMF-EU rescue package at the height of the euro zone crisis, Greece is negotiating with lenders about a revised bailout scheme after the Syriza-led government rejected the terms of the current bailout following the left-wing party’s electoral success in January.

On Friday, German newspaper Frankfurter Allgemeine corrected an article in which IMF managing director Christine Lagarde was quoted as saying that a Greek exit from the euro area was “a possibility”. Ms Lagarde was speaking on the fringes of a G7 meeting of finance ministers in Dresden.

The Greek government has already ordered local authorities to transfer cash reserves to the central bank as the country struggles to meet regular public sector wage and pension payments.

“I don’t share the idea that we will have fewer worries and restraints if Greece gives up the euro,” Juncker said in an interview with German publication Sueddeutsche. “It would fix the idea in heads that the euro is not irreversible.”

1 How safe is it to go back to the office?
2 Elderly parents living in property you own will save you on capital gains tax
3 More than 40% of help-to-buy recipients already had deposit
4 Most workers now expect choice to work from home part-time
5 Construction workers among first PTSB borrowers off payment breaks
6 Cinema tensions laid bare by deep crack in theatrical release windows
7 Regeneron says its antibody cocktail prevents and treats Covid-19 in animals
8 Owner of Dundrum Town Centre to sell prized assets
9 EU may delay digital tax proposals, official says
10 56 financial firms entered or expanded Irish operations in 2020
Real news has value SUBSCRIBE