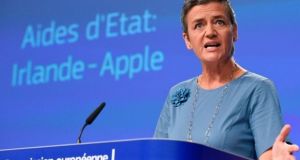 European Union competition commissioner Margrethe Vestager has said she is hopeful of a winning the appeal against the Apple tax ruling, but admitted there are “no guarantees” it will succeed.

The European Commission announced in late September it was to appeal the ruling in favour of Ireland that found the tech giant did not need to pay €14.3 billion to the state, to the European Court of Justice.

The ruling in favour of Ireland and Apple was seen as a blow to Ms Vestager’s efforts to rein in tech behemoths and clamp down on arrangements seen as sweetheart tax deals.

Speaking at a press conference at Web Summit on Friday, Ms Vestager said while the commission respected the EU’s General Court’s decision, there were aspects of it she thought should be challenged.

“One of the things we really liked in the Apple judgment, and which was the same in other judgments, is that the court confirmed we can use state aid tools in cases like this,” she said. “On the fundamentals we have the backing of the court. Now what we are asking here is to test some of the assessments as to how the organisation influences the way that taxes were being paid.

“Obviously we will defend our cases and hope for a win, but obviously there are no guarantees as these are independent courts,” Ms Vestager added.

The Irish Government has always maintained that no state aid was given to Apple. The appeal process is expected to take up to two years to complete. Until there is a final determination, the funds that amount to over €14 billion when interest is included, remain in an escrow account.

During the press conference, Ms Vestager also touched on the new Digital Services Act package, something she said she was looking forward to seeing being introduced.

The new regulation is the first major overhaul of the EU’s approach to big tech companies in 20 years and is likely to label online platforms as gatekeepers which should be subject to more onerous rules in terms of illegal content.

“I think it is needed,” said Ms Vestager. “It is about time that this happens because the things that we have discussed for so long in the real world and agreed upon and implemented, should of course also be the same rules for when it comes to illegal content when we’re online,” she said.

The commissioner said it was difficult to say what impact the incoming Biden administration might have on big tech but added that if the US and EU could come together to discuss issues such as data transfer and privacy that it could only be a good thing.