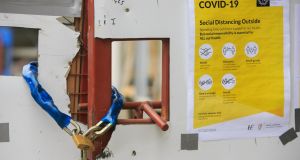 Incentives for businesses rather than personal income tax cuts are being examined by Fianna Fáil and Fine Gael as part of a new rescue plan for the Irish economy once Covid-19 is contained, according to the Business Post

Incentives for businesses rather than personal income tax cuts are being examined by Fianna Fáil and Fine Gael as part of a new rescue plan for the Irish economy once Covid-19 is contained, according to the Business Post. The plan is also expected to temporary Vat cuts across a number of the worst affected sectors, the write-off of rates bills and access to working capital for business.

Several Irish banks and lenders are adding new conditions to mortgage loan offers, seeking assurances in relation to job and income risks caused by the crisis, according to the Sunday Independent.

The paper also reports how local authorities could face a €727 million plunge in commercial rates collected - almost half of the total collected annually - due to the Covid-19 crisis. It comes from a financial analysis report carried out by local authority finance experts for the County and City Management Association.

In the ongoing dispute between businesses and insurers over payouts on business interruption policies in the wake of the crisis, the Business Post reports that publicans have been urged to take their cases to the state’s financial watchdog, the Financial Services and Pensions Ombudsman.

Brown Thomas and Arnotts reopened their online stores on Friday, after introducing additional safety measures at the distribution centre, the Sunday Independent reports. The managing director of both stores told the paper the websites are focusing on the beauty, home and electronics departments, with a smaller than usual fashion offering.

In the UK, the Treasury is preparing contingency plans to take emergency stakes in companies threatened with collapse by the coronavirus. The Sunday Telegraph reports that a leading financial figure who has worked for the UK government before has been approached to lead a “bailout taskforce” which would inject vital funds into potential corporate casualties in return for equity stakes.

In non-Covid-19 news, oil giants ExxonMobil and Equinor have completely dropped their exploration interests in Ireland, while the Chinese state has relinquished all but one licence, the Business Post reports. The moves follow an announcement in September by the Government of a ban on future oil exploration.

Telecoms group BT has pulled back from a €300 million deal to sell its Irish operations to Mayfair Equity Partners, seven months after entering exclusive talks with the London private equity company, the Sunday Times reports. The paper says it understands the move is not related to the coronavirus crisis.

EY has received the wort scores of the big four accounting firms in the first appraisal of audit quality to be mad public by the industry watchdogs, the IAASA, according to the Sunday Times. The watchdogs chief executive is quoted as saying “while in general the quality of auditing in Ireland is good, there is room for improvement. In some areas that room is significant.”

Finally, Emmet Ryan in the Business Post reports that a virtual online pub where users can book a table to share with friends and attend gigs or play games is due to open this Friday.