Microsoft among companies to announce total of 405 new jobs

Positions to be created across software, communications and hospitality sectors 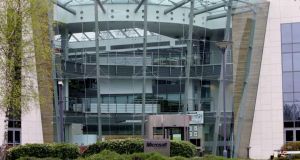 Microsoft is one of the companies expanding, with the software group set to hire a further 95 people at its operation in Sandyford.Photograph: Cyril Byrne / THE IRISH TIMES

Five companies, across a range of sectors, are set to create over 400 jobs. Software giant Microsoft will recruit a further 95 people across a variety of roles, including 35 graduate positions. The software group already employs some 1,900 people in Dublin.

Cathriona Hallahan, managing director of Microsoft Ireland said: “We are delighted that Ireland has been selected as the location for these new development roles. This investment builds on the strong development work that has been done by our team here at the European Development Centre over the past few years and deepens our development footprint in Ireland. These are important roles in two key areas of the business.”

Microsoft is also hiring in the areas of online services program management, devices sales and operations planning (S&OP) as well as advertising operations and channel management at its Europe Middle East and Africa Operations Centre.

In Belfast, telecoms giant BT is creating 165 jobs at a new call centre. The new BT Flex customer contact centre will provide support to other BT operations across the UK. It is the second major contact centre to be established by the group in the city.

First Minister Peter Robinson said the company, which employs 2,300 people across the North, had considered other locations and its decision to re-invest was a “testament” to the “positive business environment” in the North.

In other job news, bar and restaurant group the Wright Bar Group, which has nine venues across Dublin including in Airside Retail Park in Swords, as well as Clontarf and Malahide, will invest €800,000 in developing two new businesses with the creation of 100 jobs.

Brandtone, the Dublin based mobile marketing group , will create 29 new jobs with an investment of €2.9 million, while Roscommon based communications company FCS Global, which provides communication solutions including voice, data and networking , will add 10 new jobs to its Irish operation.