Arguments in Germany over security of its 5G rollout, and whether Chinese tech giant Huawei should be shut out of network 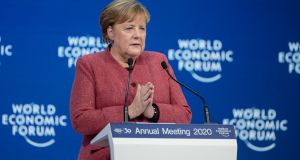 Diversification is crucial to ensuring a country’s security in the rolling out of 5G mobile technology, and shunning one supplier altogether risks being counter-productive, German chancellor Angela Merkel said on Thursday at the World Economic Forum in Davos.

Mrs Merkel’s government has been wrangling for weeks over how strict security requirements for Germany’s 5G rollout should be, and whether they should effectively shut out Chinese technology giant Huawei from the network.

German operators are all Huawei customers, and have warned that banning the Chinese vendor would add years of delays and billions of dollars in costs to the launch of 5G networks.

Without naming Huawei, Mrs Merkel said of the 5G conundrum: “How do I make myself secure? I think I make myself the most secure through diversification and redundancy where it is necessary – those are the technical approaches to secure myself.

“I don’t think I make myself particularly secure if I completely eliminate providers in their entirety and then don’t know how they develop – I am sceptical about that,” she said at the annual meeting in Davos.

Fellow CDU politician Norbert Roettgen said on Tuesday there was a groundswell of support among lawmakers in Mrs Merkel’s conservative bloc to require firms that roll out Germany’s 5G network to be free of political influence in their home country.

The US says equipment provided by Huawei, the world’s leading telecoms equipment vendor with a market share of 28 per cent, contains “back doors” that would enable China to spy on other countries. Huawei has denied the allegations.

US president Donald Trump’s administration imposed export controls on Huawei in May, hobbling its smartphone business and raising questions over whether the Chinese company can maintain its market lead in the telecoms equipment sector.

Turning to the crisis in the Middle East, Merkel warned against prematurely scrapping an international nuclear deal with Iran, saying it would be wrong to abandon an “imperfect” deal with nothing better in place.

On climate change, she said the world needed an open dialogue to heal the gap between sceptics and believers. “Time is pressing, so we – the older ones, I am 65-years -old – must make sure that we take the impatience of young people positively and constructively.

“But as we live in a time when facts are in competition with emotion... we need to reconcile the emotions with the facts. And that is perhaps the biggest social challenge...that requires at least that we speak to one another.”