Merging two economies: How would a united Ireland add up? 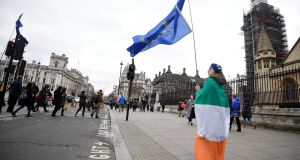 The economies of Northern Ireland and the Republic are very different in many respects. Photograph: Toby Melville/Reuters

As fears grow of a no-deal Brexit, the possibility of a Border poll on a united Ireland is back on the news agenda, even if the Government is saying it will not be rushed into supporting this option. But what would be the key issues in merging two very different economies, which have had divergent fortunes in recent years ? And how would the issue of the huge subsidy from the UK exchequer be dealt with?

New research sheds light on the economics of a united Ireland and the divergent performance of the two economies. And it points to the huge amount of further research and decision making which would be needed in planning out the future of a united economy.

1 One hundred Irish retailers for all your online Christmas shopping
2 Covid-19: Backlog forces HSE to skip calls to thousands of close contacts
3 People who throw house parties can be fined €1,000 and jailed for up to a month under planned law
4 Golf in Level 5 Covid restrictions: Clubs still waiting to hear if they can remain open
5 School ordered to reopen after closing due to Covid-19 fears
6 Brexit: UK government suffers heavy defeat over ‘law-breaking’ Bill in House of Lords
7 Minister urges objectors to Cork flood relief plan to stop legal action
8 Lockdown take-aways: Here's the pick of Dublin's restaurant meals to go
9 Covid-19: State moves to Level 5 for six weeks with hopes of ‘meaningful’ Christmas celebrations
10 Support bubbles: Everything you need to know
11 Miriam Lord: Dáil reeks of alcohol but Irish politics will not be sanitised
12 Life under Level 5: What will the next six weeks look like for the State?
13 Thirteen further deaths and 1,269 new cases of Covid-19 recorded in the Republic
14 Don’t panic-buy! Don’t panic-buy! How to spend your last hours before lockdown
15 Much of what we think about Covid-19 is wrong. We need to change the conversation
16 Schools should not reopen after midterm unless safety improves, say unions
17 ‘Waiting for your children to die, knowing that it can happen at any time, is crushing’
18 Will schools remain open during the six-week lockdown?
19 Fintan O'Toole: State bumbling along with ad hoc decision-making as Covid crisis worsens
20 US election: Candidates neck-and-neck in Georgia, poll shows
21 Fines for Covid-19 breaches can influence behaviour but will people pay them?
22 Girl delivered early from terminally ill mother settles case for €900,000
23 Co-living apartments could become ‘glorified tenement living’ says Taoiseach
24 Six weeks of Level 5: Non-essential shops to close, no visitors to homes and a 5km travel limit
25 Aldi to impose limits as Christmas toys go on sale
26 Fair deal? Family at odds with hospital and each other not so sure
27 Hugo Keenan could start in changed Ireland team against Italy
28 Railway cottage with amphitheatre garden in Ballsbridge for €745k
29 Rescue operation under way to prevent freighter hitting rocks
30 Extra day to Dáil debate on extending State’s powers during pandemic
31 Róisín Ingle: After seven months of this headwreck, what needs to be done feels harder than ever
32 Covidiots of all ages are giving two fingers to everyone
33 Residents support elderly man in bid to resist notice to quit apartment
34 The Irish Times view on Level 5 restrictions: a heavy toll on the economy
35 Rory O’Connell: ‘I didn’t get to know my sister Darina until I came to Ballymaloe’
36 Marcus Rashford is Man United’s hero in the Paris rain again
37 High levels of microplastics in infant-feeding bottles released during formula preparation
38 Bill that overrides UK’s Brexit deal denounced in House of Lords
39 ‘I am finding the balance of life is getting more and more complicated’
40 An Post Irish Book Awards 2020 shortlists revealed
Real news has value SUBSCRIBE