Live Register and PUP claimants top half a million in November 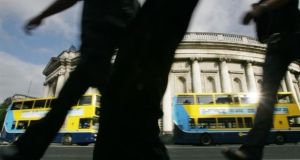 Some 12 per cent of those on the Live Register were under 25 years of age.

The number of claimants on the Live Register or in receipt of the Government’s Pandemic Unemployment Payment (PUP) swelled to over half a million last month, with lockdown measures throttling economic activity in several sectors.

The Central Statistic Office (CSO) said the number of people on the register or receiving the PUP rose by 2.5 per cent to 535,786 in November, which coincided with another nationwide lockdown to curb the spread of coronavirus.

The figures do not include the 300,000 plus workers whose wages are being supported by the Government’s Employment Wage Subsidy Scheme (EWSS).

At the same time, the unadjusted Live Register total for November was 194,058. Some 12 per cent of those on the Live Register were under 25 years of age.

“The Covid-19 income supports were originally set up as short-term emergency income supports but they have been extended several times and there have been changes made in terms of the eligibility criteria and how they are being administered,” the CSO said.