‘We are running out of places to dance,’ says councillor objecting to plans 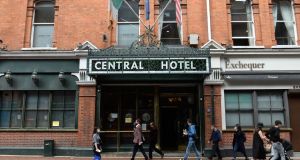 The redevelopment of the Central Hotel has been approved.

Dublin City Council has given the green light for a major expansion of the Central Hotel on South Great George’s Street and Dame Court into a new 6,554sq m five-storey hotel with 125 bedrooms and a rooftop garden.

In the revamp, the Rí-Rá nightclub space is to become a “speak-easy” while the space occupied by The Globe bar is to be transformed into a retail outlet.

As part of the application by Exchequer Developments, the existing Library Bar in the hotel will be reduced in size to make way for additional bedrooms.

Labour Senator Ivana Bacik was one of a number of politicians to object. She told the council that a petition opposing the development had collected more than 1,000 signatures in a week.

In her objection, she said Rí-Rá, The Globe and the Library Bar had become “iconic institutions” in Dublin.

“I am not opposed to the development of hotels in principle, but I have grave concerns about the closure of cultural and recreational institutions to facilitate these developments,” Ms Bacik said.

Labour Cllr Daragh Moriarty told the council that Dublin’s “cultural fabric is being eroded one new hotel at a time” and that it is “vitally important” that the council takes action to stop and reverse it.

In a separate objection, Cllr Claire Byrne from the Green Party told the council: “We have already witnessed an excessive erosion of our club culture in the city, in particular over the past few years, mostly to make way for hotels and student accommodation. We are running out of places to dance.”

The council planning report, which recommended permission, acknowledged that a number of the third-party submissions had highlighted the loss of night-time activity.

“The proposal retains a night-time use in the basement, retains the Library Bar and provides new night-time options on the ground floor,” the report said. It concluded that “the range of uses proposed will ensure a balance between shopping, leisure and cultural, and that non-retail uses will not dominate this section of South Great George’s Street”.

The report recommended a grant of permission after stating that the proposal “would not injure the amenity of property in the vicinity and accords with both the City Development Plan and the proper planning and sustainable development of the area”.

BCP Capital, partners in the venture, earlier this year said that the overall scheme would result in a significant net increase in bar and restaurant space. A spokesman said then that the current Rí-Rá nightclub space would remain as a bar/nightclub, “and the much-cherished Library Bar will also remain a core part of the hotel and its identity”.

Third parties now have the option to appeal the council decision to An Bord Pleanála.