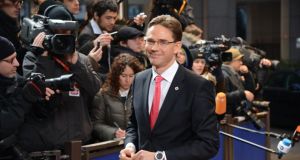 He has held the office of finance minister, party leader and prime minister, and all before the age of 40, but Jyrki Katainen faced one of his toughest tasks when he appeared before a group of European Parliament committees in September.

Finland, which along with fellow triple A-rated countries Germany and the Netherlands was among the most hardline proponents of austerity during the euro zone crisis, was now being given one of the top economic jobs in the European Commission – vice president for Jobs, Growth, Investment and Competitiveness.

Katainen’s response was clear – fiscal responsibility and growth-enhancing policies are not mutually exclusive. “It’s not black and white between whether we need responsible financial policy or growth,” he told MEPs. “We need both.”

Eight months later the message from the Finnish Commissioner, speaking ahead of this week’s visit to Belfast and Dublin, is the same. “It’s very important that member states continue to reform, and keep the public finances in good shape . . . but one thing we are really missing is investment. If you compare investment levels to the long-term average, we are lagging something like €300 billion per year investment. That is why the commission in concentrating on this side.”

Mr Katainen is in town this week to promote the cornerstone of Brussels’ new found focus on investment – its €315 billion investment package.

The European Investment Bank is playing a key role, both in managing the fund and making investment decisions. While targeting traditional investments in projects covering the spheres of healthcare, technology and energy, it is also focusing on SMEs and midcaps, with the EIB now expected to lend €20 billion more than originally envisaged to SMEs under the plan.

The main aim of the fund – known as the European Fund for Strategic Investments (EFSI) – is to mobilise finance that is already in existence but has not found its way into riskier investments.

“There is plenty of liquidity everywhere,” says Katainen. “Companies and the banks are not lacking liquidity, what is lacking is risk-sharing financing. This is what I hear regularly, in every place that I visit. Europe at an aggregate level is lacking venture capital. Our aim is not to increase the amount of liquidity – the ECB is doing that. We want to create a niche fund, in the sense that it concentrates on higher risk projects and thus shares the private sector risk.”

In its aim to provide a new channel of funding for SMEs and midcaps, the EFSI dovetails with another commission proposal – the idea of a ‘Capital Markets union’, as the commission tries to wean European businesses off their over-dependence on bank financing and shunt them towards alternative sources of funding.

The notion of a European commissioner embarking on ‘investor roadshows’ across Europe is undoubtedly innovative, and potentially signals a culture shift within the European Union from a model of economic development based on subsidies and structural funds to an EU that is prepared to work with private investors.

But concerns have also been raised about the viability of the plan. There have been accusations of simply packaging old wine in new bottles, a view emanating in particular from the European Parliament, which is unhappy that some of the money for the fund is being taken from the EU budget. Katainen denies this, pointing out that the core fund is complementary to the work the EIB is doing anyway, and is specifically focused on higher-risk investments.

The leverage ratio envisaged by the plan – attracting 15 times the core investment – has also raised eyebrows. Katainen defends the estimates.

“If you look at the EIB’s track record – for example, two years ago when we capitalised EIB by €10 billion, it went onto mobilise €180 billion – that was a leverage ratio of 18. We are using a slightly more moderate figure because it’s focused on high-risk projects.”

Another potential problem for the Juncker plan is the three-year time frame. Standard and Poor’s is among those who have pointed out that the time frame is too short for capital markets, with investors bound to demand a longer term perspective. Will the investment plan be extended?

“Whether this will last longer than three years is still an open question,” says Katainen. “The commission proposed that, if decided, the proposal could be continued, but it’s one of the issues we are discussing with the European Council and the European Parliament at the moment. This is an open question.”

“We needed to see what the demand was like from member states.”

While technically the Investment Plan won’t be up and running until the end of the summer, pending approval by the European Parliament and European council, a number of projects have already been given the green light, including 14 primary healthcare centres in Ireland. Given Ireland’s strong track record in attracting EIB funding, further projects are likely to get the go-ahead with yesterday’s Citizens’ Dialogue in the Convention Centre keen to push Ireland’s credentials in the digital arena.

Likewise, despite signs of a pick-up in the European economy, Katainen is reluctant to sound too buoyant. “At the moment [growth] is stronger than what we have seen for many years. We expect GDP to grow in the euro area by 1.5 per cent and 1.9 per cent next year, while at the EU-level the projections are higher.”

But he points out that much of this growth is down to specific factors rather than inherent structural trends. “The EU economy is benefiting from quantitative easing, the low oil price, while global growth is pretty steady and the euro has continued to depreciate,” he says, warning that these factors “won’t last forever”.

“The macroeconomic side is moving in the right direction but we just have to make sure the recovery’s sustainable,” he says. “That means there’s no room for complacency.” CV Name: Jyrki Katainen Age: 43 Family: Married with two children Role: Vice president of the European Commission with responsibility for Jobs, Growth, Investment and Competitiveness. Career: Having trained as a teacher, he became involved in Finnish national politics at an early age. He was minister for finance from 2007 to 2011 and prime minister of Finland from 2011 to April 2014.

What might surprise you: He is an old friend of Lucinda Creighton. Both were members of the youth wing of the centre-right European People’s Party (EPP) in their younger years.

What won’t surprise you? It seems he has lived up to his reputation as a cautious Finn by leaving domestic politics just in time. His party, the National Coalition Party, lost last month’s general election in Finland, propelling Katainen’s successor Alex Stubb out of office, though the party is likely to continue in Government as part of a coalition.