Irish taxes back in Europe’s sights as public consultation begins 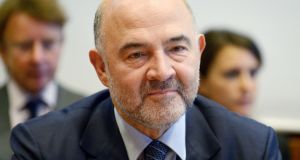 Further pressure looks set to be heaped upon the Irish Government over its resistance to European Union-wide corporation tax reforms, after the European Commission launched a public consultation on the taxation of internet giants such as Google and Facebook.

The commission has called for public submissions on “how the EU can ensure that the digital economy is taxed in a fair and growth-friendly way”. It said the existing framework is out of date. The consultation will run until January 3rd.

In comments that may not be well-received within Leo Varadkar’s Government, finance commissioner Pierre Moscovici called for a European-wide taxation framework for web multinationals.

“Nobody can deny it: our tax framework does not fit any more with the development of the digital economy or with new business models,” he said. “Member states want to tax the huge profits generated by digital economic activity in their country. We need a solution at EU level, bringing robust solutions for businesses and investors in the single market.”

Mr Varadkar has previously warned against heaping further taxation on the digital economy, while the Government has generally resisted any EU-wide corporation tax initiatives, believing they will erode Ireland’s base.