Extending maturities on loans to Ireland may serve as catalyst for return to market, according to report 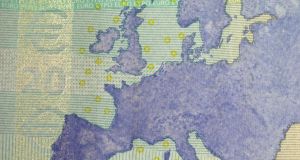 Talks with ratings agency Moody’s suggest that an extension of loan maturities would see it reconsider upgrading its current Ireland rating, which has put off many potential investors

Extending maturities on euro crisis loans to Ireland may serve as an “important catalyst for the full restoration of market access, according to a new report.

The troika/EFSF report, to be presented to an informal European finance minister meeting in Dublin this weekend, warns that Irish borrowing in the coming years remains “demanding by historical standards” though “well manageable under tranquil market conditions”.

“In view of the higher government debt and deficit, Ireland’s debt redemptions in the coming years are large compared to the past and the market situation can potentially be challenging if market conditions in the future would become more adverse again,” said the report, seen by The Irish Times .


Debt instruments
The report praises the Government for “skilfully” using debt instruments for smoothing out “humps” in private debt redemption in the coming years.

They say financial markets recognise an Irish commitment to fiscal consolidation and improving competitiveness. On the other hand, investors still see a financial system “plagued” by low interest margins and profitability and a lack of affordable funding.

Until that changes, Ireland’s financial system is “not yet in a position to support a durable recovery of the real economy”.

“High levels of non-performing loans in banks’ balance sheets remain a key concern to market participants, given the associated risk for capital shortfalls, which in turn would generate contingent liabilities for the sovereign.

Talks with ratings agency Moody’s suggest that an extension of loan maturities would see it reconsider upgrading its current Ireland rating, which has put off many potential investors.

The second half of the report weighs up options for lightening the debt burden of loans to Portugal and Ireland. The first option, re-profiling loans, would be of “limited benefit” to Ireland. Option two, a short maturity extension of 2½ years, would be of assistance in the immediate post-programme period but would not help with a cluster of new loans due to mature after 2022.


Funding humps
A five-year extension, the report found, would smooth out immediate funding humps but create problems after 2020. An extension of 10 years or more might, the report implies, dampen the appetite for “consolidation, stabilisation and modernisation”.

A seven-year extension is recommended as a “balanced compromise” between lender and creditor constraints. This option would smooth out its debt redemption profile well into the 2020s.