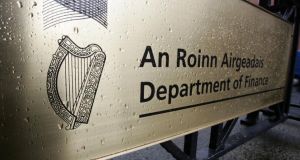 Department of Finance figures show the total tax take in the year to date is almost exactly as planned, standing at just under €11 billion.


In April, tax revenues amounted to €2.129 billion, an increase of €51 million or 2.4 per cent, on the same month in 2012, according to new figures from the Department of Finance. This was half the increase the Government had targeted.

Over the first four months of the year, however, the tax undershoot in April was not enough to knock the department’s aggregate projections off course. The total tax take in the year to date is almost exactly as planned, standing at just under €11 billion.

The only figure among the exchequer tax returns that will cause any concern to the Government was weak receipts of value added tax. VAT revenue was down marginally in the first four months of the year and 3 per cent below target.

Separate retails sales figures for the first three months of the year recorded a contraction on the same period in 2012. This is likely to explain the weak VAT figures.

Homeowners paid €21 million in local property tax to the exchequer in April as the due date for paper-based filing approached. The ahead of schedule payments suggest that the non-payment rate will not be as high as that of the household charge, which the property tax replaces.