Ireland’s economy set to shrink 8.5% due to pandemic 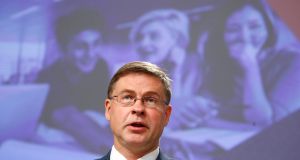 Coronavirus will hit Europe with a deeper recession than anticipated, with Ireland’s economy set to shrink 8.5 percent this year, according to a new forecast by the European Commission.

“The economic impact of the lockdown is more severe than we initially expected. We continue to navigate in stormy waters and face many risks, including another major wave of infections,” said commission executive vice-president Valdis Dombrovskis.

Overall the EU is forecast to slump 8.3 per cent this year, a deeper downturn than previously expected, as the virus closed businesses, shuttered high streets, and kept people in their homes for a longer period than initially thought.

All EU economies are forecast to return to growth next year, but the commission warned that the outlook could darken. The current outlook was based on an assumption there would be no second wave of the virus.

“The risks to the forecast are exceptionally high and mainly to the downside,” it warned. “The scale and duration of the pandemic, and of possibly necessary future lockdown measures, remain essentially unknown. The forecast assumes that lockdown measures will continue to ease and there will not be a ‘second wave’ of infections.”

Ireland’s economy grew the most of any country in the EU during the first quarter of 2020: it was up 1.2 per cent, supported by pharmaceutical exports, construction investment, manufacturing and the information and communication sectors. Almost every other EU economy shrank.

However, private consumption has taken a severe hit in Ireland due to its “long and wide-ranging” measures to contain the virus, according to the forecast.

It added that the future was uncertain as British and EU negotiators struggle to reach agreement on the post-Brexit trading relationship from January.

It said the Irish economy was also vulnerable to decisions of multinationals based in the State, and could fall foul of changes to the international taxation environment.

Among EU countries, Italy’s economy is forecast to be the hardest hit, shrinking by 11.2 per cent this year, followed closely by Spain, Croatia and France.

The commission said the grim forecast highlighted the urgency of agreeing an economic recovery plan.

EU leaders are due to meet next week to discuss a €750 billion stimulus package proposed by the commission, aimed to counteract the economic damage of the pandemic. It is being held up by the opposition of member states that fear liabilities for their taxpayers.

“The policy response across Europe has helped to cushion the blow for our citizens, yet this remains a story of increasing divergence, inequality and insecurity,” said economy commissioner Paolo Gentiloni.

“This is why it is so important to reach a swift agreement on the recovery plan proposed by the commission – to inject both new confidence and new financing into our economies at this critical time.”