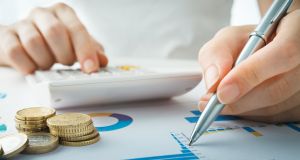 The ESRI noted that if the Government had raised the tax bands and credits in line with forecast wage growth, it would have cost €1.5 billion. Photograph: iStock

Households will see their disposable income effectively fall next year as a result of Budget 2020, which left tax bands unchanged, analysis from the Economic and Social Research Institute (ESRI) found.

Analysis by the think tank showed that disposable incomes would be 1.7 per cent lower next year compared with this year as prices rise by 1.4 per cent and wages increase by 4.5 per cent in the absence of any changes to tax bands. Households will, however, gain from higher spending on public services, the ESRI said.

The institute noted that if the Government had raised the tax bands and credits in line with forecast wage growth, it would have cost €1.5 billion.

Despite the forecast for households to have less disposable income, the ESRI said that it “seems like the overall fiscal stance is quite prudent”, adding that for most taxpayers, they’re in for an “effective tax rise given inflation and earnings growth”.

“While the overall fiscal stance of Budget 2020 is prudent, freezing most tax thresholds and benefit rates in cash terms will leave household incomes lower than under a neutral budget,” said Karina Doorley, senior research officer at the ESRI.

“However, spending on policies such as the national childcare scheme should partly offset this for low-income households,” she added.

On other measures, the ESRI noted that the extension of the help-to-buy scheme, which helps first-time buyers with the deposit for a home, is a “poorly targeted policy that could add to house price growth in the coming years”.

ESRI research officer Barra Roantree added that the measure, which is expected to cost the exchequer €200 million over the next two years, will affect house prices as long as supply is constrained. According to Revenue data, 40 per cent of claims so far were for mortgages with a loan-to-value of less than 85 per cent, an indication that the measure has worked for people who already have the deposit required for a mortgage.

The ESRI also noted that the “entire system of motor tax needs radical reform given that improving emissions standards are eroding the revenue base”.

And they noted that alcohol duty was effectively cut in Budget 2020 given the forecast of 1.4 per cent inflation next year.

“Extra spending in Budget 2020 was focused on public services and pay, partly funded by a real tax increase on most households. Scope was also found to extend several tax breaks, including help-to-buy,” Mr Roantree said.

The ESRI welcomed the €6 per tonne increase in carbon tax, noting previous research which indicated that such an increase would reduce emissions with negligible effects on the wider economy. However, they noted that the tax disproportionately affects lower-income groups. And even though Budget 2020 ring-fences revenue to fund climate action measures, “less than half of those in the lowest income tenth of households receive fuel allowance”, which is due to rise by €2 per week to compensate some, mostly retired, households.

Asked about whether the Government should review its budgetary measures if a Brexit deal is agreed, Ms Doorley said it would be a “good idea next year to look at the regressive nature of the last four budgets”.