Housebuilding: Dublin’s urban sprawl is only getting worse 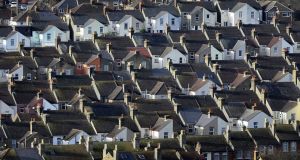 New figures show an extraordinary surge in house-building in Dublin’s commuter counties. The Mid-East region is expanding – at an extraordinary rate. With the economy growing strongly and house-hunters priced out of Dublin, house-building in the region – including Meath, Kildare, Wicklow and Louth – was running 57 per cent ahead on an annual basis in the third quarter, according to figures in a report by Goodbody Stockbrokers, using official data sources. Urban sprawl is spreading again, out from the greater Dublin region, raising big questions for housing and planning – and leaving many families facing long, car-based commutes. This is the opposite of what was intended under the spatial plan set down by the Government – but it is what is happening. What does the evidence show?

1. Where are houses being built? The first part of the story is familiar. First-time buyers are being priced out of many parts of the Dublin market, while more expensive properties appropriate to those trading up are often not selling. The reality of affordability – or unaffordability – is hitting home. The Goodbody data, compiled largely using BER (Building Energy Regulation) data, shows a big 34 per cent year on year jump in house completions nationally in the third quarter. However, the market is still in a strange place. The biggest contributor to the annual growth was the 57 per cent rise in new dwelling completions in the Mid-East region – the Dublin commuter counties. In contrast, completions grew just 9 per cent in Dublin itself. Apartments represent around 44 per cent of completions in Dublin. Outside Dublin, almost half of the completions are semi-detached and not far off another quarter are detached. As Goodbody put it, apartments only seem viable in Dublin “resulting in a sprawl of lower density housing outside the capital”. The brokers estimate that over the past year around 5,100 completions have taken place in the Mid-East, not far off one quarter of the national total.

1 Life as a Facebook moderator: ‘People are awful. This is what my job has taught me’
2 Cancellations and confusion as coronavirus threat edges closer
3 Coronavirus: What we know so far about how Ireland is affected
4 Conor Murphy told at Sinn Féin rally he has nothing to apologise for
5 ‘I woke up the next day in a guy’s house covered in bruises’
6 Sealing the deal: how to buy a house at the right price
7 Owen Doyle: Ireland were fortunate to keep full complement on pitch
8 Newton Emerson: Letting IRA exist just enough to not exist taints politics
9 Five dead in Molson Coors brewery shooting in Milwaukee
10 The Independent groups - who are they and what do they want?
11 Coronavirus and Europe: Hand shaking, hand washing and hand wringing in Brussels
12 Mass gatherings due to go ahead in Ireland amid coronavirus outbreak
13 Fine Gael and Fianna Fáil agree to hold policy talks
14 What is coronavirus and what should I do if I have symptoms?
15 Coronavirus: Governments ramp up preparations for looming pandemic
16 Irish in-flight entertainment firm blames coronavirus for closure
17 ‘People think I’m drunk because of my slurred speech’
18 Coronavirus: Ireland plans for massive increase in tests
19 Rescheduling Ireland-Italy games a logistical challenge
20 Coronavirus: British government calls for calm after eight schools closed
21 No capacity in main Dublin hospitals for extra patients needing intensive care
22 Veteran property players acquire 40 apartments in D4
23 Flack’s death raises difficult questions about partner violence
24 Wealthy investors’ legal challenge against Revenue fails
25 Dublin stabbing: Parking space was at centre of previous rows, gardaí told
26 Corporate tax loss from reforms may exceed forecasts, Ibec warns
27 Unwillingness to swallow bitter pill of higher EU budget share ‘shocking’
28 Buy yourself a dream. . . with the planning headaches sorted
29 Woman (38) appears in court charged with murder of Garreth Kelly
30 Couple challenge decision over access to Killarney lake
31 Joanne O’Riordan: Mo Farah should have to face Jeremy Kyle
32 Man charged over ramming of car at armed Garda checkpoint in Cork
33 State would need 16 fighter jets for full air defence capability, expert says
34 Rugby Stats: Haley and Botha post impressive numbers for Munster
35 Coronavirus: ‘All bets are off’, says aircraft industry chief
36 Sinn Féin’s problem with names much more than mere wordplay
37 Greek islanders clash with police over proposed migrant detention camps
38 Dublin nightclub drops entry fee and asks for charity donation instead
39 Irish Rail may have to suspend Sligo line services due to floods
40 New wearable tech can predict worsening heart failure
Real news has value SUBSCRIBE